"Hands off our cars, warmists!"

In July 2017 the political commentator Andrew Bolt wrote an article which claimed that the Turnbull Government was planning to introduce “carbon dioxide standards so tough that no SUVs or cheap cars could pass them”.  Apparently this plan was part of the Government’s “global warming crusade that’s punishing the poor without helping the planet”.  Having “turned electricity into a luxury item”, the Government wants “to make cars too expensive as well”.  These views were published under the headline “Hands off our cars, warmists”.

Writing earlier that year in The Australian, reporter Ben Packham claimed that because of these standards “businesses would be hit with a $2 billion compliance bill” and that the “massive red tape burden” would be passed on to consumers.  He quoted a Queensland National Party Senator who said he would “die in a ditch” to stop this “carbon tax on cars” from being implemented.

What was going on here?  Was this simply part of the proxy war against Malcolm Turnbull by a section of the media?  Or the standard knee-jerk reaction to anything related to climate change?

Whatever it was, the articles failed to mention that the Government was offering three options, or that eight years notice was being given for these standards, or that 80% of the world’s automakers had already implemented them.  And it apparently didn’t matter that people living in rural and remote parts of Australia would make significant savings from improved fuel economy that would rapidly pay back any increase in vehicle prices and leave car owners with a net saving.

In 2017, as a volunteer with 350.org, I worked with another volunteer (Christina McPhail) on a series of submissions to Government inquiries dealing with climate change issues.  In February 2017 we responded, on behalf of 350 Australia, to the Federal Government’s invitation for submissions on its Draft Regulation Impact Statement (RIS) on Improving the Efficiency of New Light Vehicles.  This was the proposal that so infuriated Andrew Bolt and like-minded commentators.

To understand this proposal, we need to go back to October 2015, the month after Malcolm Turnbull became Prime Minister. That was when the Government established a Ministerial Forum on Vehicle Emissions to consider emission standards and fuel quality standards for vehicles. The responsible Minister at the time was Paul Fletcher, the Minister for Urban Infrastructure.

The Government was conscious of the international context.  Of the G20 countries, 17 were following the European vehicle emission standards, which were implemented for health reasons, since vehicle emissions are a contributing cause of ischemic heart disease, lung cancer, stroke and asthma attacks.  These “Euro” standards set limits on emissions of nitrogen oxides, particulates and carbon monoxide. The most recent round of European standards (known as Euro 6) had been introduced in 2015, in conjunction with measures to reduce the sulphur content of fuels.

In a parallel measure, the EU introduced regulations to set CO2 emission targets, primarily as a climate change policy.  The initial target for new passenger cars, introduced in 2009, was 130g/km (ie a limit of 130 grams of CO2 emitted per kilometre of car travel).  Later the target was tightened to 95g/km, to be achieved by 2021. These targets are an average across all manufacturers, and are adjusted for each manufacturer according to the average weight of their car fleet.

So, back to Australia.  In its draft RIS the Government observed that the average efficiency of new light vehicles sold in Australia was significantly worse than in Europe (175g/km compared to 120g/km).  And it noted that around 80% of the global light vehicle market – including the US, EU, Canada, Japan, China, South Korea and India – had already adopted mandatory fuel efficiency standards.

The draft RIS rejected the idea of a voluntary target negotiated with manufacturers and instead offered three options (105g/km, 119g/km and 135g/km) for a mandatory target to be met by the year 2025.  It noted that a target of 105g/km would broadly align Australia with the EU and US targets.

The targets are one mechanism for encouraging the uptake of battery EVs and hybrids.  To reinforce this, the Government indicated that it would adopt the EU idea of “super-credits”.  For example, when adding up a manufacturer’s vehicle sales and CO2 emissions to assess their compliance with the standard, a sale of a zero-emission vehicle will be counted as three sales. 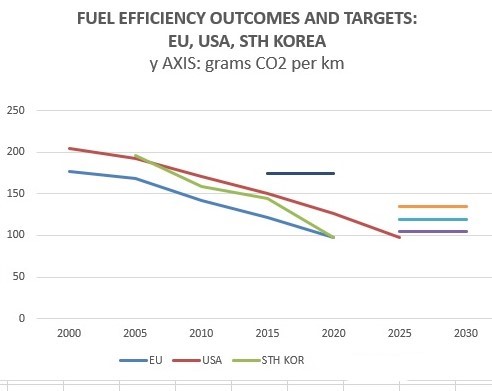 The chart above shows the trajectory of emissions for the EU (lower curve), the USA (upper curve) and South Korea.  It shows their actual outcomes for new passenger cars up to 2015, and their planned targets from 2015 to 2025.  In all three cases, the outcomes start in the range 180-200g/km in the year 2000, and the targets tighten steadily to less than 100g/km by the year 2025.  The horizontal bar above these trajectories shows Australia’s outcome in 2015.  And the three horizontal bars on the right side of the chart show what would be expected from the three options in the RIS.

In the 350 Australia submission, we drew attention to these trajectories, and we noted that the EU was now considering a range of 68 to 78g/km for the year 2025.  We argued that in the context of this chart even the most stringent of the RIS proposals looked quite weak.  We recognized that Australia could not expect to achieve parity with the EU in the short term, but we suggested that it would be reasonable for Australia to set a timeframe of no later than 2022 for the target of 105g/km.

In its submission to the draft RIS, the Australian Automobile Association (AAA) said that “any CO2 standard must maximise vehicle choice in the Australian market”, that “estimated fuel savings from a CO2 standard should reflect real-world testing results” and that the proposals could “increase the price of new passenger cars by $1,921 in 2025”.  The overall tone of the AAA response was a thumbs-down.

This view from the peak body for Australian motorists, combined with the media campaign and with opposition from a section of Coalition MPs, seems to be the reason why the fuel efficiency proposal faded from view.

And fade it did.  In the light of the AAA and media push back we expected that the Government might adopt one of its less stringent options as a compromise.  We waited for the outcome.  And waited. 2017 turned into 2018 and no announcement came from the Government.  There was no report on the submissions received.  No statement by Minister Fletcher that the proposal was being shelved.  Just silence.

Except that nearly two years later, when the proposal was taken up by the Federal Opposition, the Government would label the policy (its own 2016 proposal) as “extreme” and said that it would raise “the price of a car by $5000”.  (From a policy marketing perspective, they clearly considered that $1921 was too low a number).

After the 2019 election, AEVA wrote to the Deputy Prime Minister in his capacity as Chair of the Ministerial Forum on Vehicle Emissions.  Among other things, we asked if the Forum was still in existence, and whether all three options in the RIS had been withdrawn. That was in June 2019, and no reply has been received.

One final incident should be recorded.  It concerns the attempt to change Australia’s fuel standards to reduce the maximum permitted amount of sulphur in petrol.  It was reported recently that asthma sufferers in the United States have experienced a significant reduction in asthma attacks when they were living close to coal power stations that have closed.  Sulphur dioxide is a by-product of coal-burning, and it is well known as a significant trigger for asthma attacks.

Another key source of sulphur dioxide is emissions from petrol cars.  In concert with the Euro 6 standards, sulphur levels in petrol are to be limited to just 10 ppm (parts per million).  Australia had been examining the implementation of this fuel standard since 2011.

But in April 2019, just days before the Federal election was called, the then Minister for the Environment (Melissa Price) quietly postponed the adoption of these standards.  Until what date?  July 2027.  One wonders whether there was any effort to inform Asthma Australia of this decision.  Meanwhile, New Zealand had implemented the sulphur fuel standard in July 2018.

Since these standards were proposed in 2016, the prospects for improved CO2 vehicle emission outcomes have become less promising.  The Trump administration has proposed a pause in the tightening of US target, to keep it at around 137g/km until 2026, although the state of California is pushing back strongly against this proposal.

China has been following the European vehicle emission standards but it is not easy to obtain data on emission outcomes. A massive transition appeared to be underway in China as EV sales rose strongly from early 2017 until mid-2019, but this sales surge has halted as part of a general fall in all vehicle sales.  Vehicle manufacturers in China are now subject to a “New Energy Vehicle” credit system, which forces manufacturers to generate credit points through selling their own EVs or else buying credits from other EV vendors in a points trading system.

In Europe, it was reported last year that CO2 emissions from new passenger cars had increased for the second consecutive year, reaching 120.4g/km.  So it appears that manufacturers will find it extremely challenging to meet the EU 2021 target.

However, several countries, mostly in Europe, have announced the “nuclear option” for curbing CO2 emissions from vehicles – banning the sale of petrol and diesel cars completely from a set date, the earliest being Norway, where the ban would take effect from 2025.  It remains to be seen if these deadlines are upheld by the Governments concerned as the target dates draw nearer.

And in Australia?  While climate change remains such a partisan issue, it would take a major cultural change for both sides of politics to support fuel efficiency action.

Note: This is the second article in a series discussing EV policies (and politics) in Australia.  The first article in the series can be found here.  The next article will deal with the 2018 Senate Inquiry into Electric Vehicles.