Electric vehicles: the policies - and the politics

When someone replaces a petrol or diesel car with an electric car, the whole community benefits – not just the EV owner.  Why?  Because every such replacement abates the emission into our atmosphere of substances that damage both our health and the environment - particulates, nitrogen oxides, sulphur oxides, carbon monoxide, and of course carbon dioxide.  As we all know, the abatement of CO2 emissions is vital if we are to mitigate the worst effects of climate change.

I have felt strongly about this for many years.  It now seems a good time to look back and to write about my personal journey in coming to grips with the policies – and the politics – of EVs in Australia.

This series of articles does not amount to a systematic analysis of government policies to encourage the uptake of EVs.  Instead, it will recount my personal experience during the past six years in engaging with:

Along the way I will reflect on the prospects for AVs (autonomous vehicles) to improve our environment by breaking the model of car ownership in the 2030s.

In Australia, the EV policy saga generated some memorable slogans and images.  For example, in 2017 the political commentator Andrew Bolt wrote an article headlined Hands off our cars, warmists! to attack the proposed fuel efficiency standards. In April 2019 I surprisingly found my new Hyundai Ioniq being used by Bill Shorten in the launch of his EV policy, whereupon the Prime Minister responded with the assertion that “Bill Shorten wants to end the weekend when it comes to his policy on electric vehicles”.

After the 2013 Federal election Mike Seccombe, a panellist on the television show Insiders, observed “It’s no longer any use expecting the Government to tackle climate change.  People will have to take action themselves”.  That was the spur for me to join the climate action group 350.org.  I also looked at my own carbon footprint.  My wife and I double glazed our house and installed a solar system.  Then we examined the emissions from our two petrol cars.  I was horrified to find that my Ford G6E was emitting 350 grams of CO2 for every km that I drove.  We resolved to replaced it with an EV, although that goal was not to be realized for another five years, partly due to the unavailability of suitable models.

In 2014 the ACT Government released its Low emission vehicle strategy discussion paper (pictured).  The ACT had just implemented a “Green Vehicle Duty Scheme” under which a vehicle that emits 130 g/km or less of CO2 would attract zero stamp duty when purchased as a new car. There was also a minor discount on the annual registration fee for low-emission vehicles.  I decided to make a submission on how EV take-up in Canberra could be further encouraged. 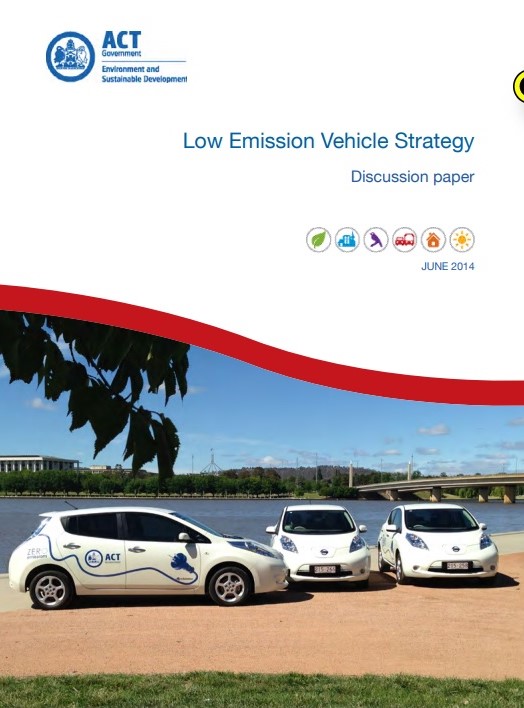 In working on the submission, I started from the perspective that my wife and I were one of the 54% of Canberra households that owned at least two cars.  If we replaced one of them with an EV and re-arranged our car use (so there would no longer be “his car” and “her car”) we estimated that we could make a very substantial reduction in petrol consumption and therefore in our carbon emissions. A petrol car would still be required for long range touring or trailer towing, but the EV could be used for all local trips unless we both needed to make different journeys at the same time.

It was clear that one of the biggest barriers to the take-up of EVs is their price – they cost significantly more than a comparable petrol car.  On the other hand, this price premium can be recovered over time, in whole or in part, by lower running costs – especially the cost difference between petrol and electricity as a fuel.

While researching for the submission I came across Dave Southgate's invaluable e-book  on his experience with his Nissan Leaf (pictured). Using some of Dave’s data, I did some modelling which estimated that our household could save about $2000 per year in vehicle running costs. This meant that the price premium for an EV (about $18,000, which was the difference between the price of a 2014 Nissan Leaf and the price of a comparable petrol car) would be recovered in a Discounted Payback Period of just over 10 years. 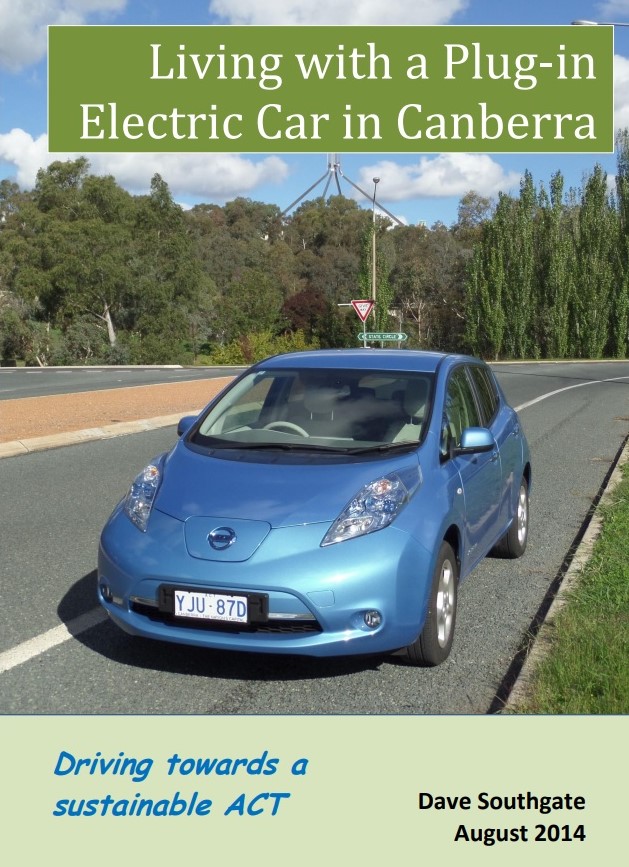 From the Wikipedia article Government incentives for plug-in electric vehicles, I learnt about the significant purchase rebates that were being offered in many countries to encourage more rapid adoption of EVs.  For example, the USA offered a tax credit of US$7500, expiring after the first 200,000 vehicles from the manufacturer concerned. The United Kingdom offered a rebate of up to £5000.

So in my submission I argued that a purchase rebate would be sensible public policy, given the health benefits and climate benefits of a faster EV uptake. If there was a rebate of (say) A$5000 the Payback Period for EV buyers could be reduced from more than ten years to about six years.  I pointed out that such a rebate could be limited to an initial cohort of vehicles in order to stimulate the market, and could be phased out once EVs comprised (say) 3% of the ACT private vehicle fleet.

Later I received comments that there would be reluctance from governments to “subsidise people who can afford to buy Teslas”.  Of course, such people will already be paying a Luxury Car Tax (LCT), but if you wished to avoid any “upper class welfare” you could always restrict EV purchase rebates to vehicles that are priced below the LCT threshold.

I shared my draft submission with Kent Fitch, a colleague who had worked with me at the National Library.  Kent thought I was being too conservative!  He drew my attention to the potential implications of the development of autonomous (or self-driving) cars.

A later article in this series will discuss these implications. In particular, it will examine the prospects for such cars, if deployed in fleets of self-driving taxis, to break the model of car ownership in the future. At this point, I merely observe that Kent went on to develop this Canberra Autonomous Car Simulation, that his modelling found that the overwhelming majority of private trips in Canberra could be served by a fleet of about 30,000 autonomous EVs, and that these trips could be undertaken at very affordable prices. Under our current car ownership model, cars are idle for most of each day. A transition to a new model (“Transport as a Service”), with a much smaller number of electric cars constantly on the move in waking hours, could have far-reaching environmental and land use benefits.

Disappointingly, the ACT Government did not report back on the submissions that it received, and did not follow through on its 2014 Discussion Paper until it released its Action Plan for Transition to Zero Emissions Vehicles in 2018.  And that Plan included neither EV purchase rebates nor any research into autonomous vehicles.

In the next article in this series (Hands off our cars, warmists!) I will examine the attempt by the Federal Government to introduce fuel efficiency standards in Australia in 2016, and the blow-back which followed.