The EVenture was held on 24 April 2002.  The core part of the event was a journey around central Canberra with the entrants travelling on five different modes of electric transport (see the map below).  In the late stages of planning, the event was extended to include a display of electric bicycles, with test rides (through a partnership arrangement with the SEE-Change E-bike Library) and a small display of electric motorbikes, supported by a new e-motorbike fact sheet.

In all, 84 entrants participated in the EVenture journey, out of a possible total of 96.  The event ran smoothly with no significant problems.  Feedback from the entrants was universally positive.  We were also fortunate to experience good weather.

Members of AEVA ACT (supported by some members of the Tesla Owners Club) provided 35 volunteers, in the roles of marshals, electric car drivers and GoBoat drivers.

In terms of the various legs of the EVenture:

The allocation of electric cars was organised so that every entrant rode in two different EV models during the EVenture.

We received a great deal of positive feedback.  Here is an example from two entrants, Ross Dennis and Lucy Mao:

I just wanted to send a quick thank you to you and the rest of the support crew for this event.

It was really well organised, the support crew were informative and helpful and the event itself was a lot of fun to participate in. We came as a result of considering turning over our old car, and possibly going hybrid/electric, so the day was particularly useful for us. Lucy and I learned a lot from talking with the drivers of the e-cars etc. and from others in the group.

The test rides of e-bikes, supported by SEE-Change, were well patronised.  There was also strong take-up of our leaflets “Facts about EVs” and “Facts about electric motorbikes”.

A quick 'straw poll' by marshals as entrants returned to the National Library rated the first leg by e-scooter as the most popular, followed by Tesla rides in the final leg and then the GoBoat leg or electric bus as next most popular.

The closing function at the National Library was an opportunity to provide our entrants, marshals and drivers with a light lunch, to support networking between our volunteers and the entrants, and to acknowledge the contribution of all parties, not least the ACT Government for the Community Zero Emissions grant.

A range of efforts was made to publicise the event, with limited media take-up despite our best efforts.  One notable exception was this positive article in the RiotACT. 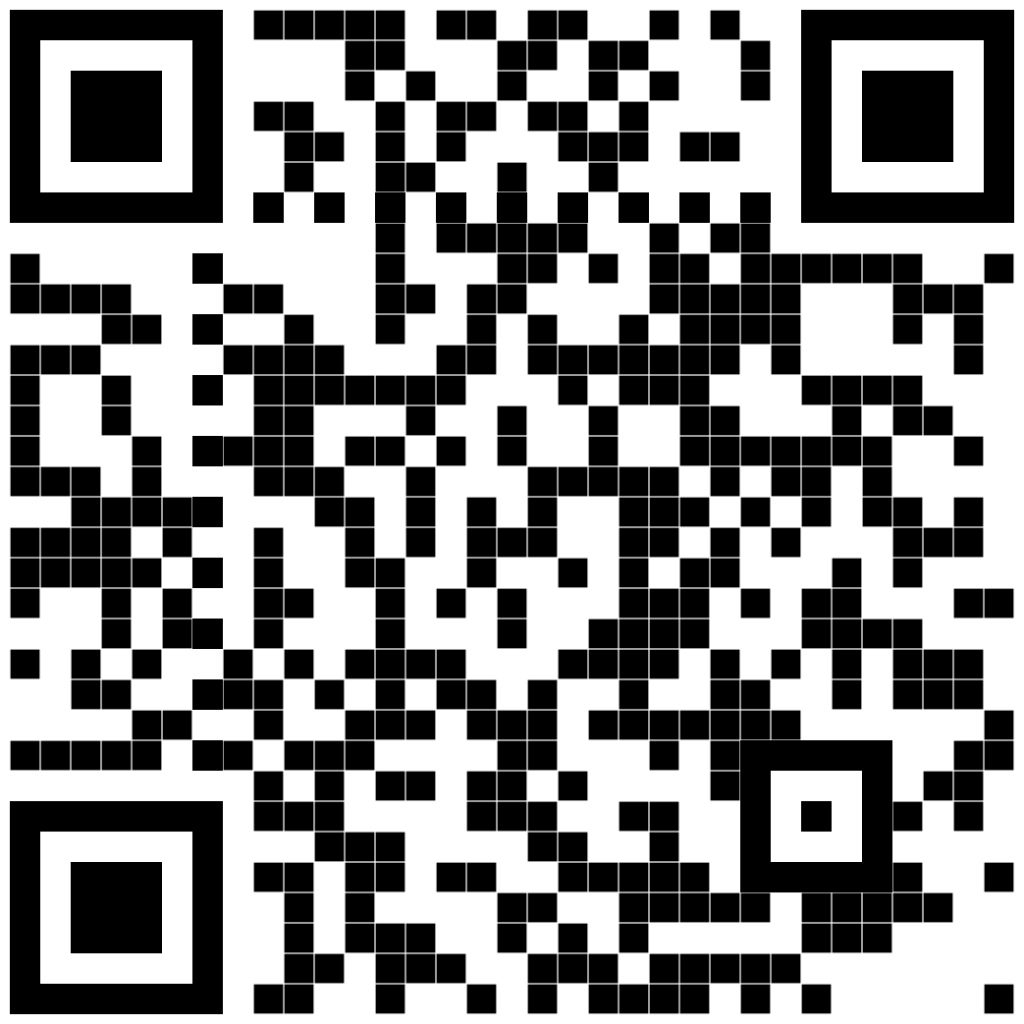 The EVenture was intended to be informative as well as enjoyable.  To this end, entrants were invited to engage with QR codes at the conclusion of each of the first five legs of the event.  These QR codes linked the entrants' mobile devices to some multiple choice quiz questions about electric transport and greenhouse gas emissions.

Scan the QR above or click here to see the response statistics to the five sets of questions.

MAP OF THE ROUTE

The EVenture journey took about 2 hours. Start/stop locations [ ] and route numbers ( ) reference the map below.

[1] The EVenture started in front of the National Library, where travel groups were briefed.  Groups will then mounted Neuron e-scooters and journeyed east along the lakeside path to the next location. In some cases, entrants opted to travel this leg on their own scooters or bicycles, or by courtesy car.  Route (A)

[3] Trevillian Quay North.  Each group was met by EV drivers, who drove them to the next location. Route (C)

[4] Parliament House bus stop.  An electric bus (a Yutong e-12) was waiting at the bus stop in Federation Mall to take travel groups to the next location.  A promotional banner (“Go Electric Now”) was highly visible. Route (D)

[5] Civic Interchange.  Groups departed the bus at Platform 7 and walked to join the Light Rail at the Alinga Street station.  Route (E)

[6] Lyneham Park and Ride.  Teams departed the Light Rail at Swinden Street station and were met by EV drivers, who drove them back to the National Library. Route (F)

[7] National Library.
Back at the National Library, groups could view the displays of e-bikes and electric motorbikes, collect informative literature and test-ride some e-bikes.  The final function was held in the Ferguson Room where entrants could enjoy refreshments and chat about electric transport with EV owners.

This event was organised and run by the ACT Branch of the Australian Electric Vehicle Association (AEVA) and was sponsored by the ACT Government (through a Community Zero Emissions Grant), Neuron Mobility, Yutong Electric Buses, Transport Canberra, and Canberra Metro Operations.

VIDEOS OF THE EVENT

This video of the event was created by Andrew Sikorski.  Another video by Ché Baker (Full Point Films) is currently being edited.

In addition, one of our drivers has published this YouTube video which records two of his journeys from the Lyneham Park-and-Ride to the National Library, and the conversations with his passengers.

All of the photos below were taken by Andrew Sikorski of Art Atelier Photography.

Neuron e-scooters lined up outside the National Library in readiness for the start of the EVenture ... 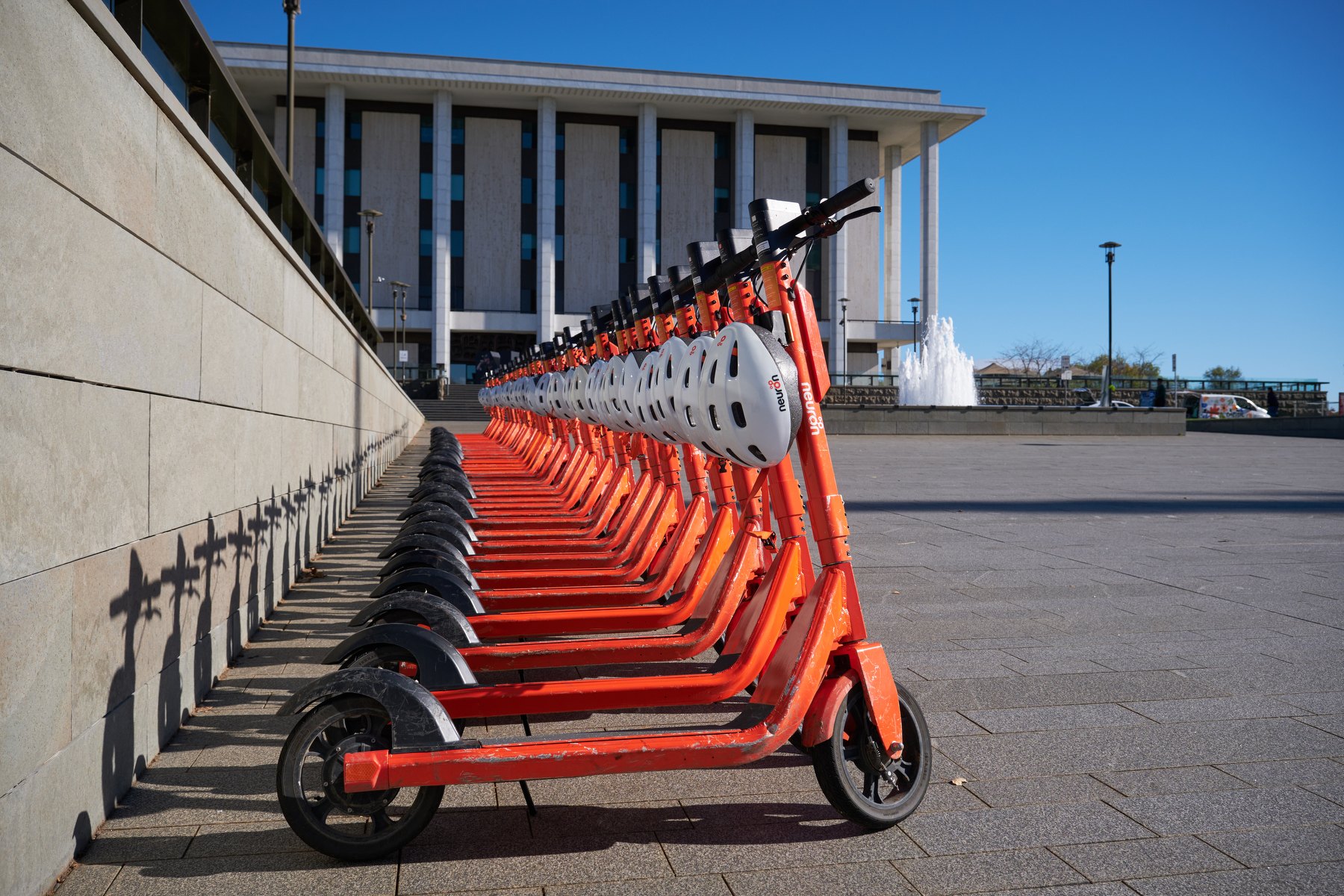 This family group elected to ride their own scooters and bicycles on the first leg ...

This group has been allocated their e-scooters and is about to head off on the first leg ... 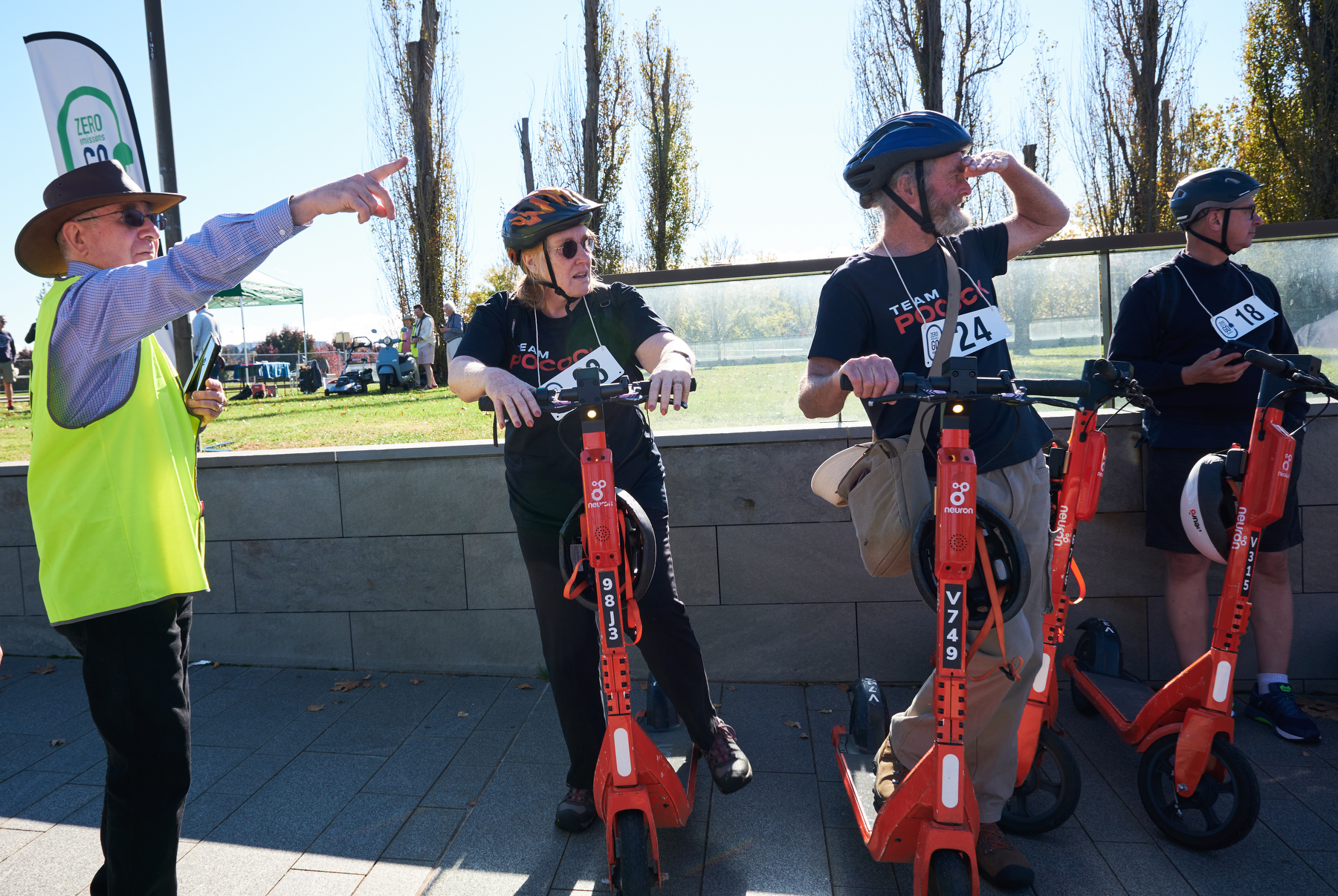 This group is about to start the second leg after being briefed by GoBoat Canberra staff ... 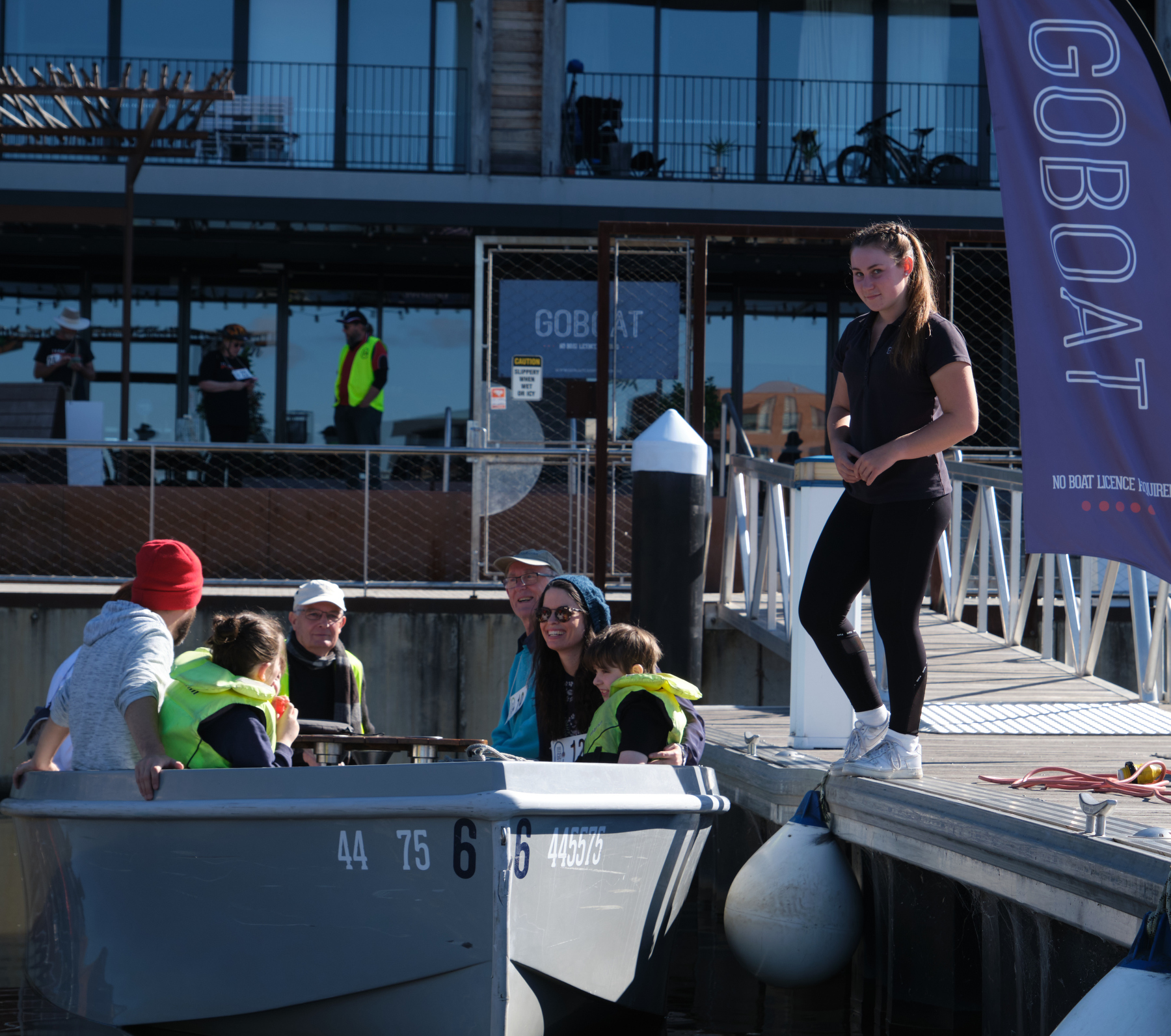 A group arrives at Parliament House (Federation Mall) having completed the third leg in an electric car ... 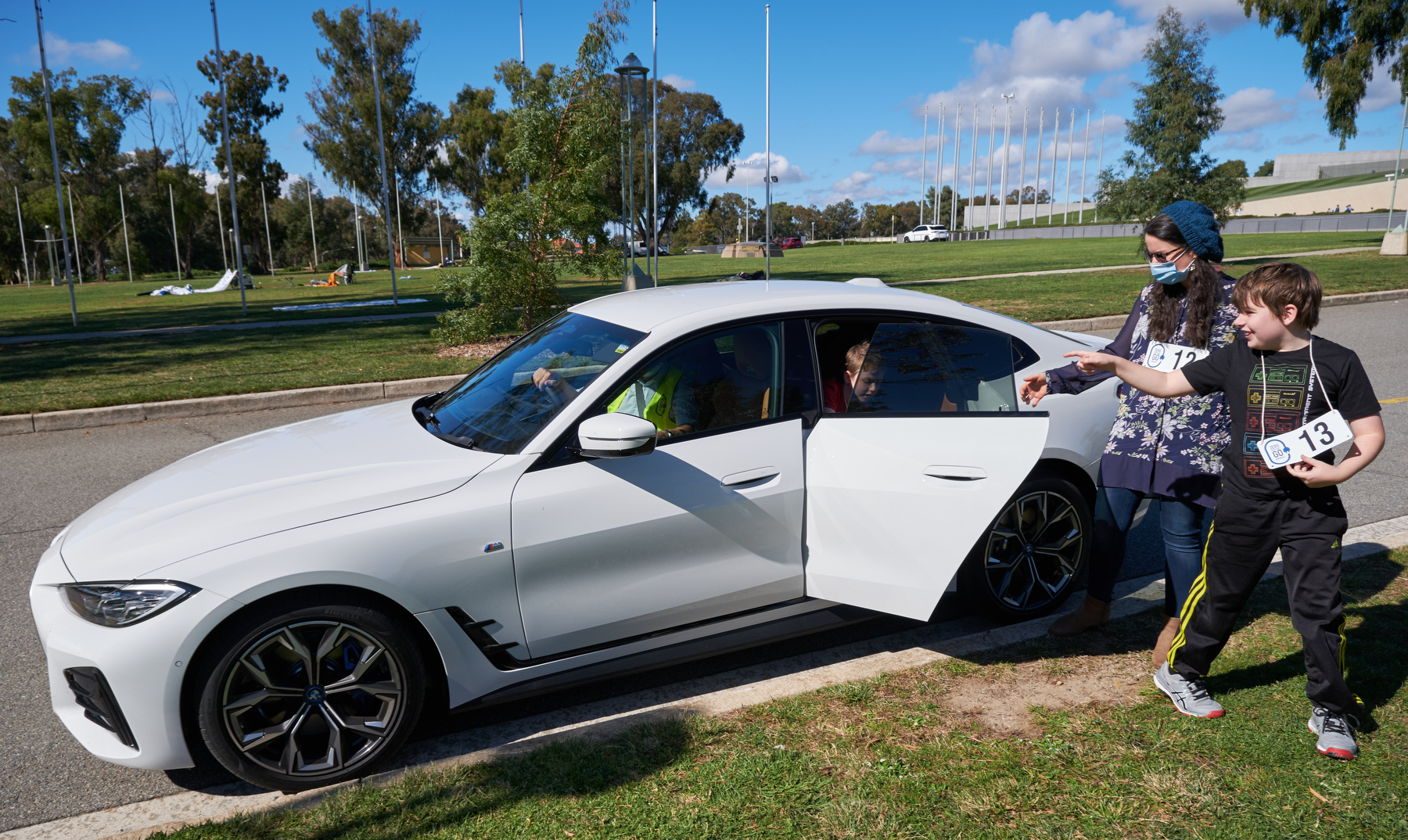 Another view of the electric bus ... 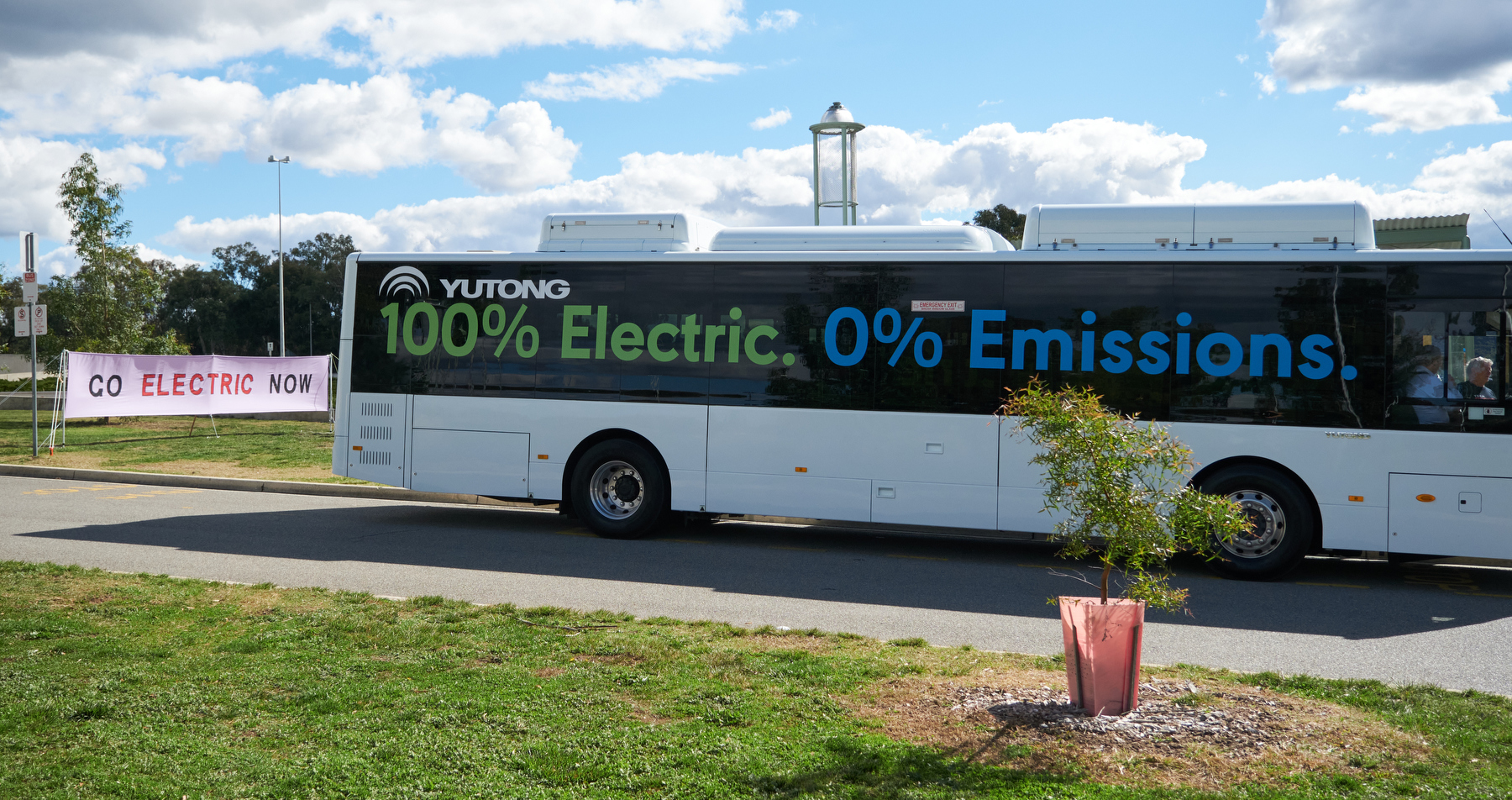 Our banner outside Parliament says it all ...

This group has arrived at the City Bus Interchange after completing the fourth leg on the electric bus, and is being briefed by our marshals ... 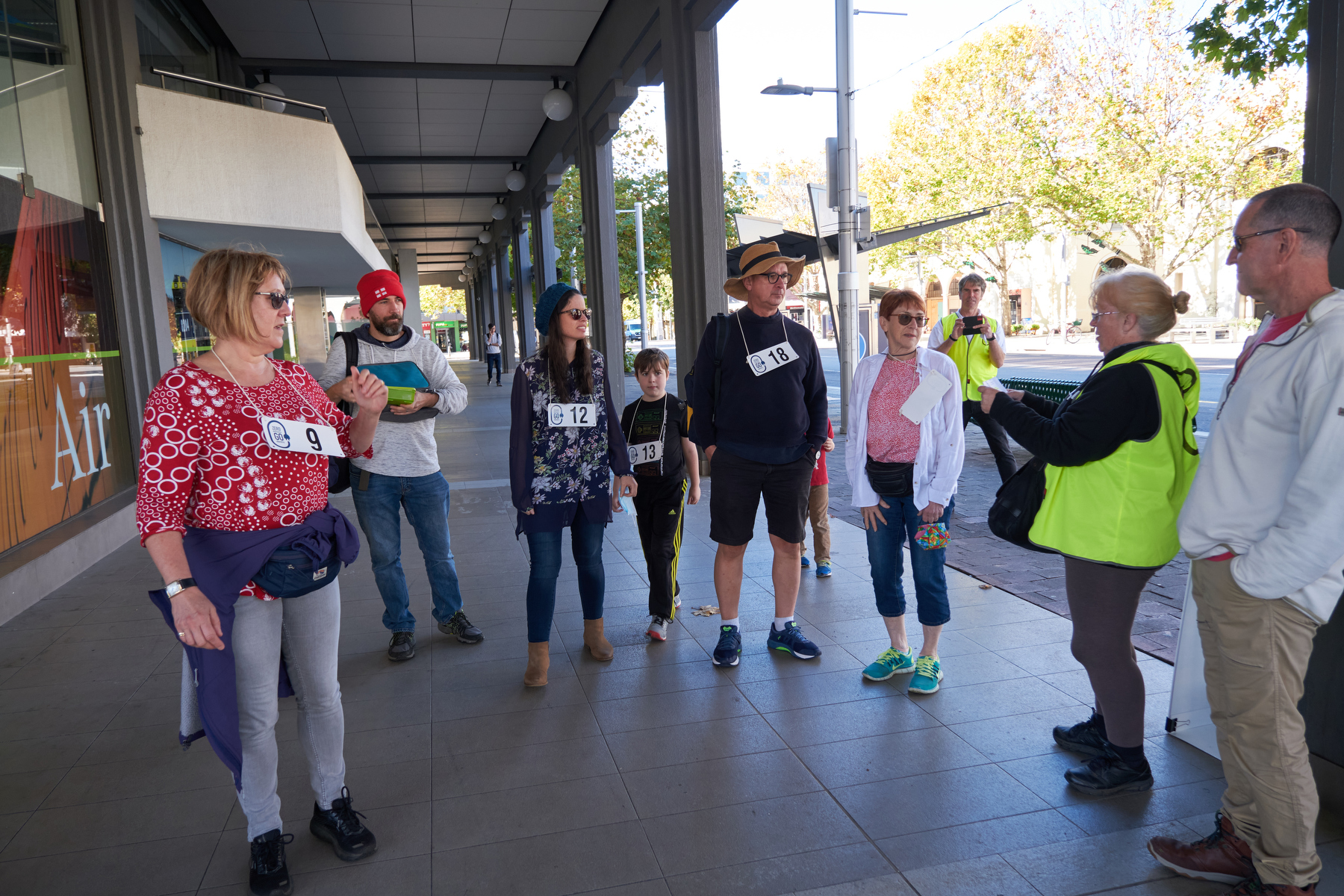 Travelling the fifth leg on the Light Rail ... 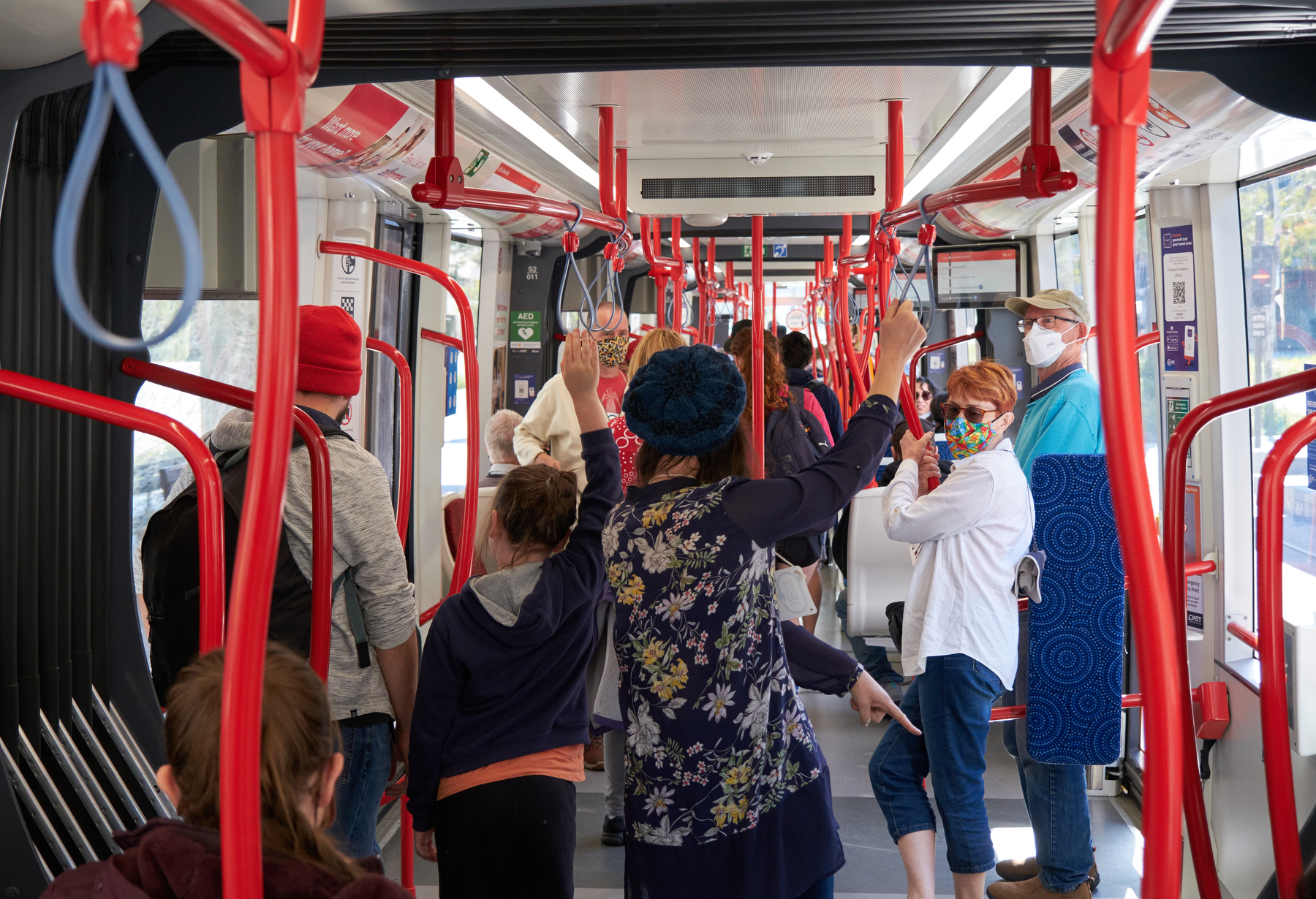 Our marshal and three of our drivers at the Lyneham Park-and-Ride, ready to take a group on the sixth and final leg ... 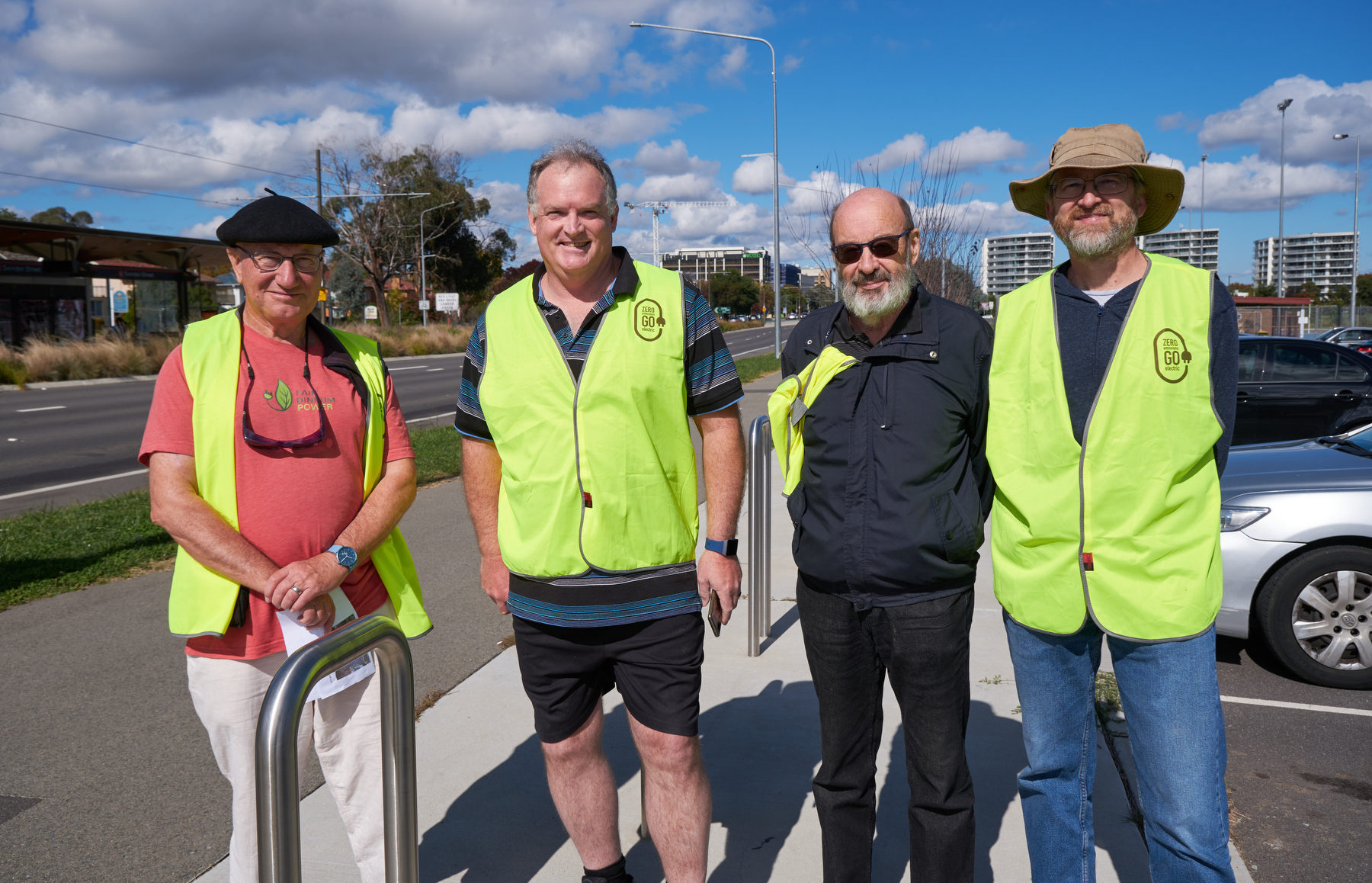 Electric cars back at the National Library after completing the final leg ... 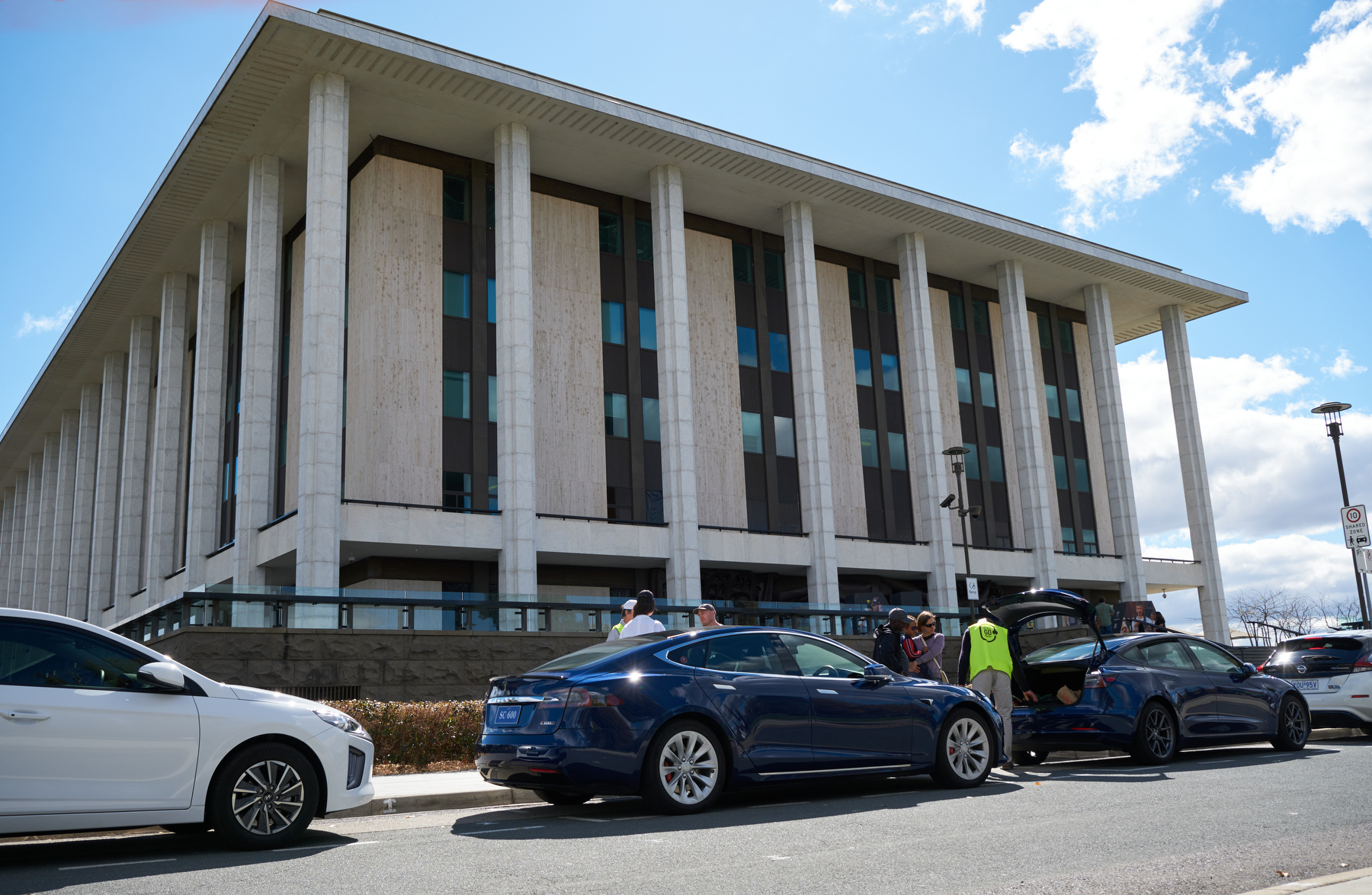 Back at the Library, here is our marquee and the SEE-Change e-bike display ... 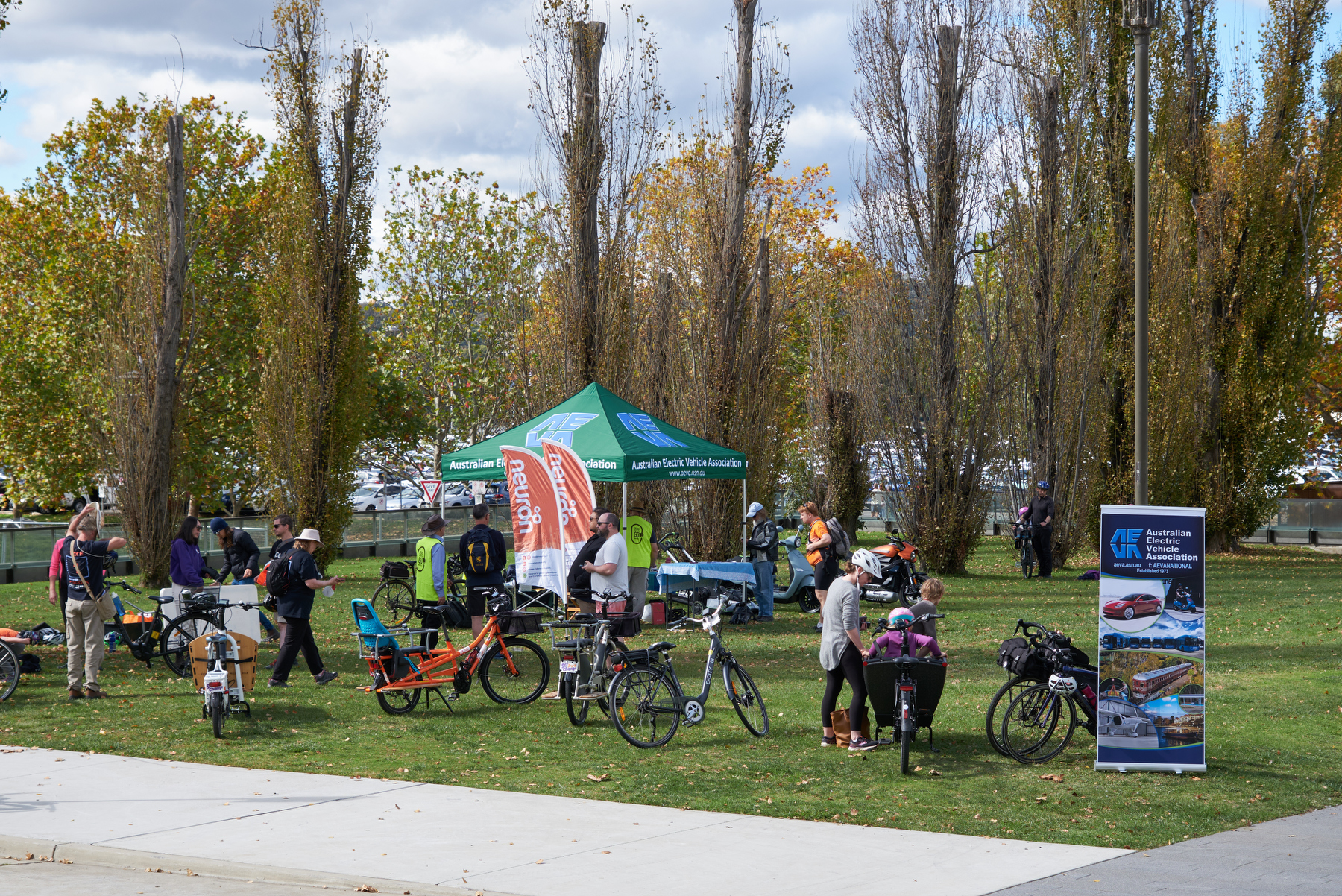 A closer view of the e-bike display ... 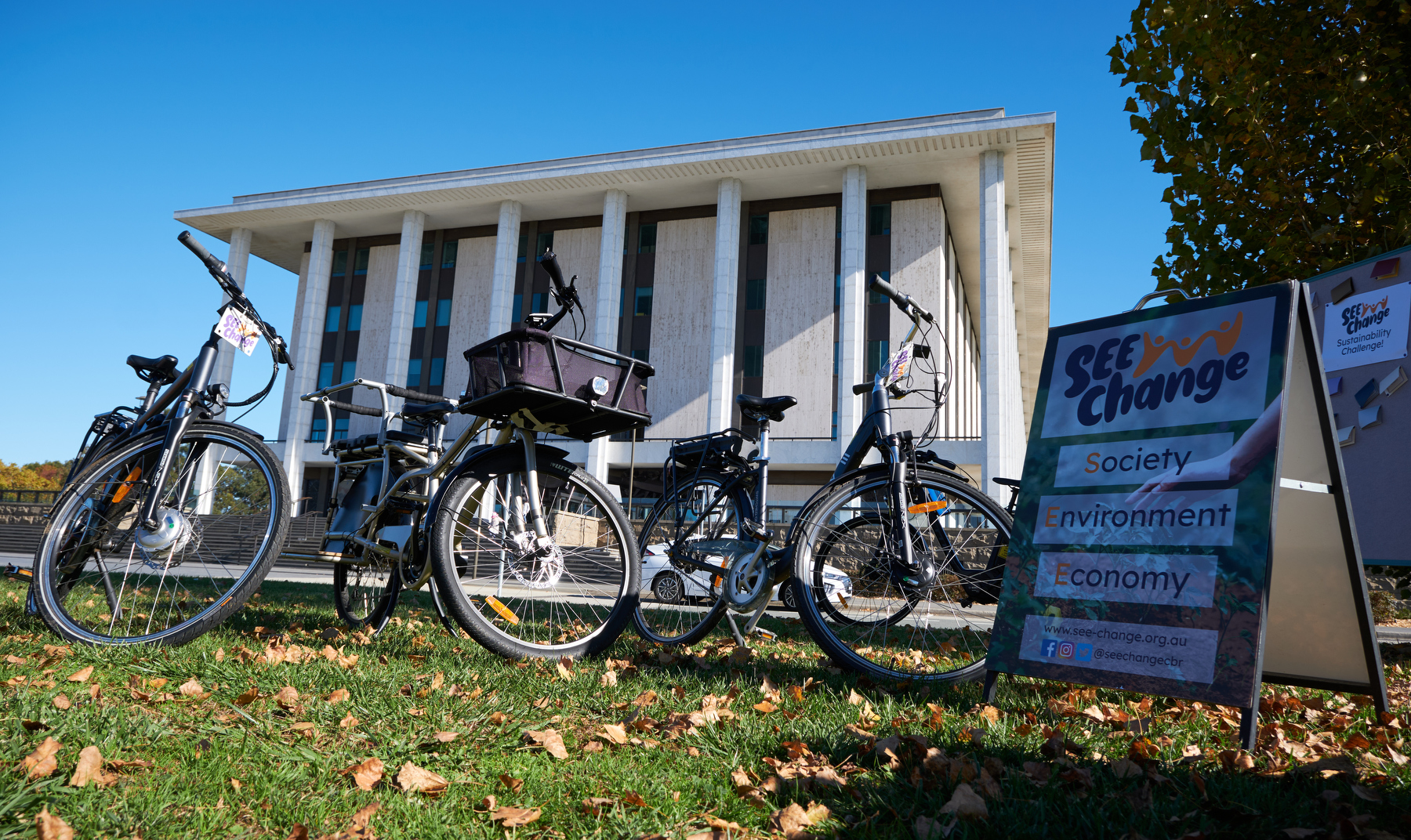 And for those interested in motorbikes, we were displaying two electric models: a Harley Davidson Livewire and a Fonzarelli Arthur ... 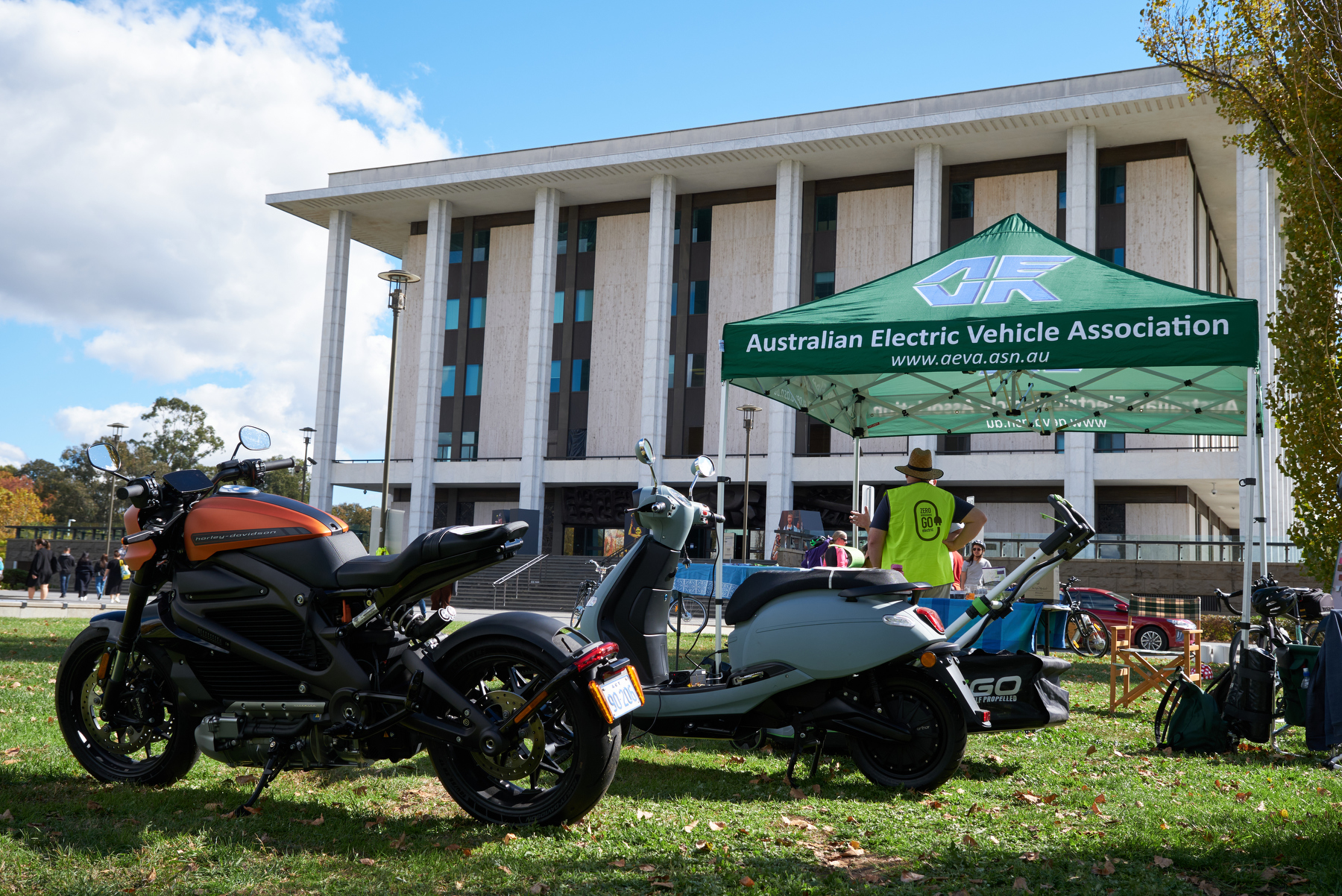