A key purpose of the event is to gain media exposure which will reinforce, to the Canberra community, the importance of electrified travel in driving down greenhouse emissions, and other emissions which impact public health.

The EVenture was planned for 6 February 2022 but has been postponed to later in 2022 due to the Covid pandemic.

The EVenture will be limited to 96 entrants.  People will be able to enter as individuals, or as part of a team of up to four members.  Prominent Canberra sporting bodies and community organisations are being invited to provide several of the  teams.

Individuals and teams will traverse the course in travel groups of 8 people.  Group will commence at the course at 15 minute intervals, with the earliest group starting at 9.15am.

At the commencement of each stage, entrants will use a QR code to access information about the mode of transport that they are about to undertake, and to complete a short quiz or activity relevant to that mode of transport.

The journey outlined below will take about 2 hours. 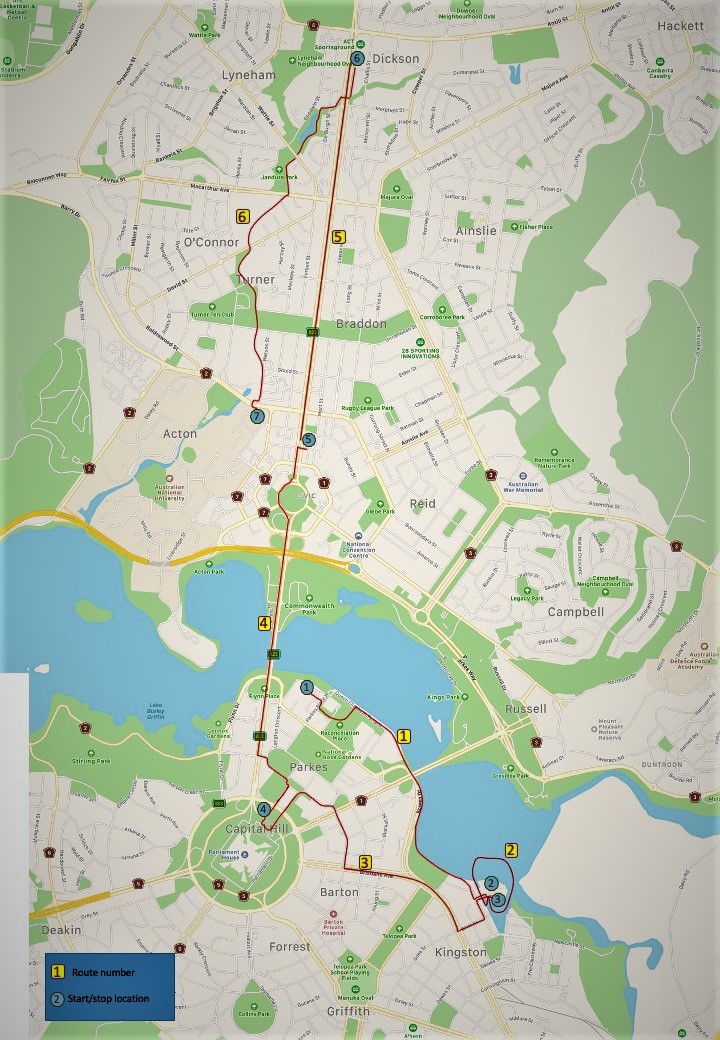 [1] Start in front of the National Library, where travel groups will be briefed.  They will then mount Neuron e-scooters and journey east along the lakeside path to the next location.

[2] GoBoat wharf, Kingston foreshore.  Travel groups will board two GoBoats for a 12 minute return journey within East Basin of Lake Burley Griffin.  Upon their return they will be met by EV drivers, who will take them to the next location.

[3] Parliament House.  An electric bus will be waiting at the bus stop in Federation Mall to take travel groups to the next location.  A promotional banner (“Zero Emissions, Go Electric”) will be highly visible.

[4] City Bus and Light Rail Interchange.  After dropping each travel group at the City Bus Interchange (Platform 7) the bus will return to Parliament House to pick up the next group.  Groups will join the light rail at Alinga St. and will travel to the next location.

[6] The bike path will be followed south to Haig Park, near the Turner Scout Hall.  Teams will assemble there for a concluding picnic.  They will receive refreshments, celebrate their journey and undertake some EV and e-bike try/rides.

It will be important to maximise exposure of the event in both local and social media.  The media will be informed about the competing teams.  We will seek television coverage of the event.  Teams will be asked to publicise their participation on Facebook and twitter.