Thoughts on the 2019 Nissan Leaf

I’ve now been a Nissan Leaf owner for more than six years.  We bought a Gen 1 Leaf at the start of 2014 and upgraded to the Gen 2 version in August last year.  As a family of four living in Canberra, the Leaf has been a wonderful car for us.  Unfortunately the Leaf seems to have received a fair amount of negative comment within EV groups and blogs in recent times.  In my view much of this criticism is unwarranted.

I must admit I was surprised when I first fully explored the new Leaf.  It seemed like a totally new car.  Bigger battery, motor, and charger accompanied by a swag of goodies that make up the modern car – cameras, sensors, halogen headlights, Bose sound system, adaptive cruise control, heated leather seats, etc, etc.  From the EV driver perspective, the way regen is handled is a great leap forward (eg e-pedal) and it is really nice to have a range indicator that performs logically. 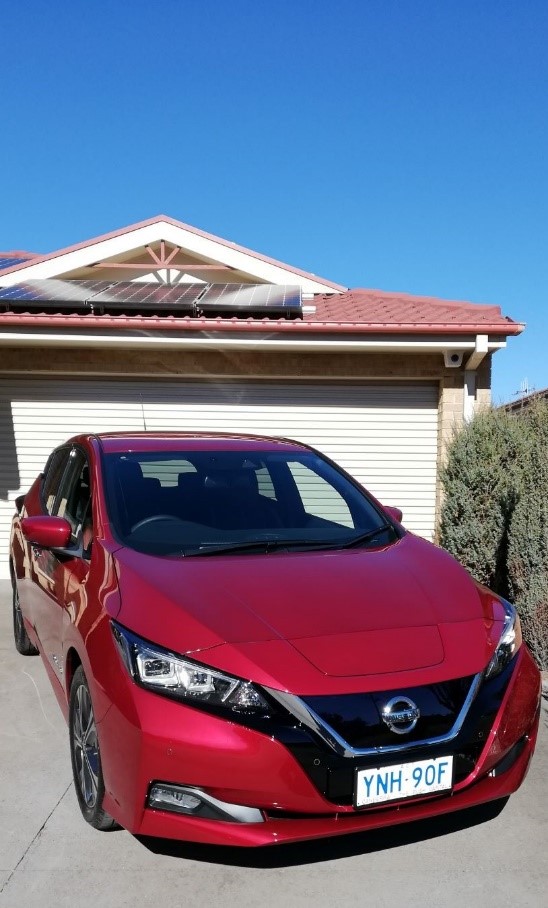 While I really loved the Gen 1 Leaf, the new one brilliantly reveals all those things you never missed but which you now can’t live without.  I often wonder what would have happened if Nissan had given the Gen 2 Leaf a different name.  I suspect that the term ‘Leaf’ carries a lot of prejudice in many people’s minds.

From ‘city car’ to ‘regional car’

We used our first Leaf as our main family car for trips around Canberra for well over five years.  When we wanted to go further we used our ICE Hyundai i30.  The Leaf was absolutely faultless but, just like all vehicles, it had its limitations.  As long as we respected its range constraints it treated us very well.

I like to term our new Leaf as a ‘regional car’.  It is very comfortable doing the regional trips that Canberrans like to do around our part of NSW – the South Coast; the Southern Highlands; and the small rural towns to the north of the ACT.  Starting a day trip with a full battery, a distance of around 300km, with one fast charge, is extremely relaxing and enjoyable.  At last fast chargers are now becoming common in the regional centres in our part of the world (though we’d like a lot more!). 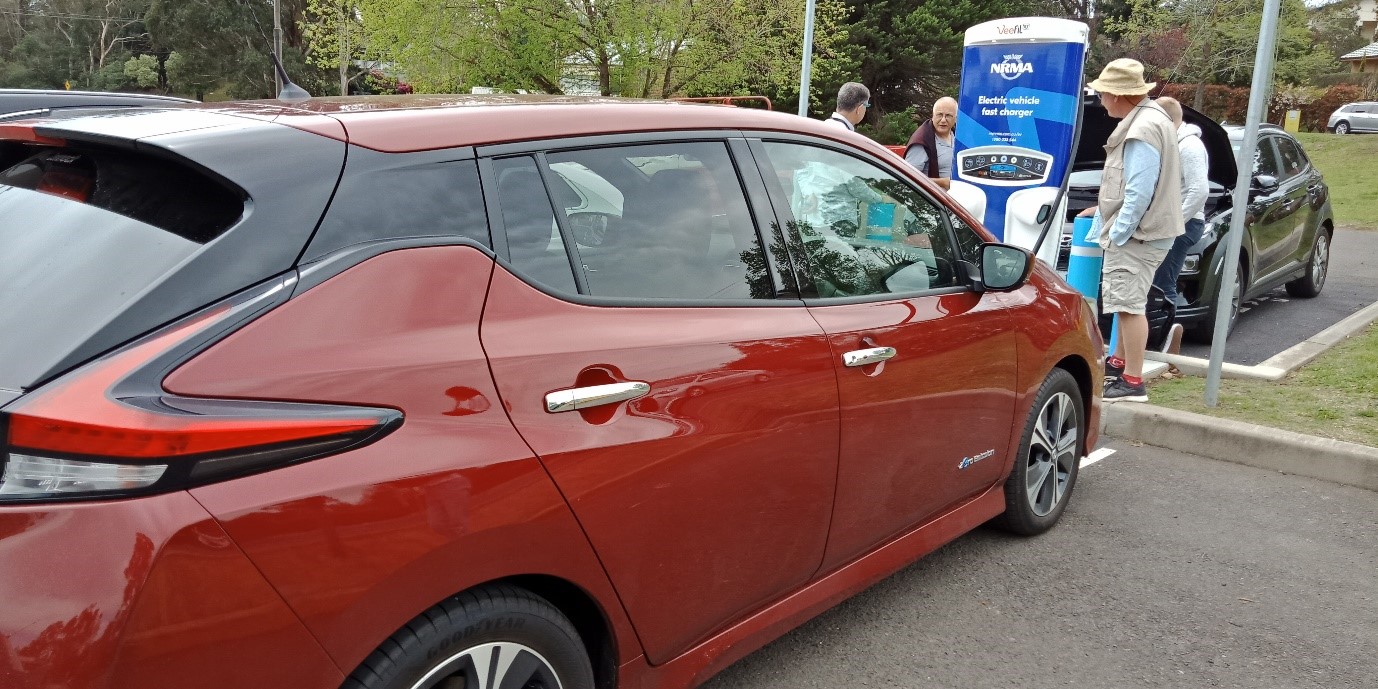 A day trip to Sydney – a distance of about 600km – is certainly achievable but to be comfortable it needs at least three fast charges and that can take a noticeable slice out of your day.  It’s not so much the charging time, but the time waiting in the queues.  Mittagong is a well known blackspot and waits are common (see photo) – but at least it gives you a chance to chat with other EV owners.

One of the more interesting aspects of the new Leaf has been Nissan’s promotion of the vehicle for use in V2H applications (see photo of Gen 1 Leafs powering a building).  In effect it is touting that the Leaf’s battery replace the conventional home battery. 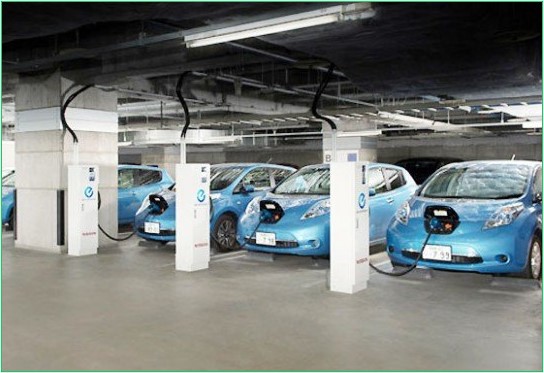 Initially I was somewhat sceptical and thought this was simply an attempt by Nissan to use the bi‑directional ability of the Leaf’s CHAdeMO charging system to identify a point of difference with its rival EVs.  I had no interest in using my precious car battery as a home battery.  However, I have now softened and can see that it might work for some people.

Having had coming up to nine months experience with the Leaf I am happy that our household energy demand would not place any great strains on the car’s battery.  For much of the year we pull an average of less than 6kWh/day from our Tesla Powerwall 2.  This amount of energy (less than 50km range) is not significant when considering our Leaf usage patterns.  Given that we already have a home battery, and a special direct solar charging set­up, I don’t envisage that we will go V2H but, at the right price, I can see it being very attractive to some owners.

Putting the work of Nissan to one side, you can sense that broad pressures are building to integrate EVs with home energy use and the grid.  I was particularly interested when I came across a recent article about a relatively low cost, compact bi‑directional CHAdeMO EVSE/charger for home use which is now being produced by a Spanish company.  For EV/grid integration to have any significant impact clearly all charging standards, not just CHAdeMO, will need to incorportate bi‑directional capabilities.  Reports are now appearing which indicate that the CCS standard is being modified to incorporate a bi‑directional functionality.

The fact that the battery in the Leaf does not have active battery cooling seems to have led to a fair amount of ‘Leaf shaming’ within the EV community.  The car is being portrayed in some quarters as being fatally flawed because it is designed this way.  To me this is very puzzling.

All cars, and indeed everything in the world, has some limitation on its performance.  The Leaf’s lack of active cooling means that it is not the car to use if you want to make a more or less non‑stop 1,000 km, or longer, journey.  If you do you will almost certainly end up with a hot battery and restricted fast charging.  However, I have no intention of undertaking such a journey.  I have never been involved in driving a car that far in one go.  So as far as I’m concerned the battery thermal management issue is of no concern to us.

I would have no hesitation in taking the Leaf on an extended road trip, with days of up to 600 km, provided there were fast chargers, or preferably slower overnight charging facilities, in the right places.

Some commentators suggest that the life of the Leaf’s battery will be compromised by its lack of active thermal management.  This may be the case, but if it were so why would the Nissan Warranty for the battery (160,000 km or 8 years) be the same as for many EVs which have battery cooling systems?  The fact that Nissan is promoting V2H suggests that the company has high confidence in the battery.

Summing up, we love the Leaf; it very capably does everything we want of it.