Five years ago, motoring journalist Matt Brogan brought a Tesla Model S over to Tasmania to do a tour of the state.  With no public charging stations to speak of, he was relying on overnight slow charging to keep the car on the road.  Unfortunately, he had to cut the trip short due to a lack of fast chargers.

Fast forward to 2018, and TasNetworks’ Fast Charger Support Scheme has resulted in two fast chargers in the state – one at Mood Food Kempton on the Midland Highway, and one installed by the City of Launceston in one of their car parks.  In 2019, twelve sites were announced as successful recipients of grants to from the Tasmanian Climate Change Office’s ChargeSmart grant program for the installation of fast chargers. 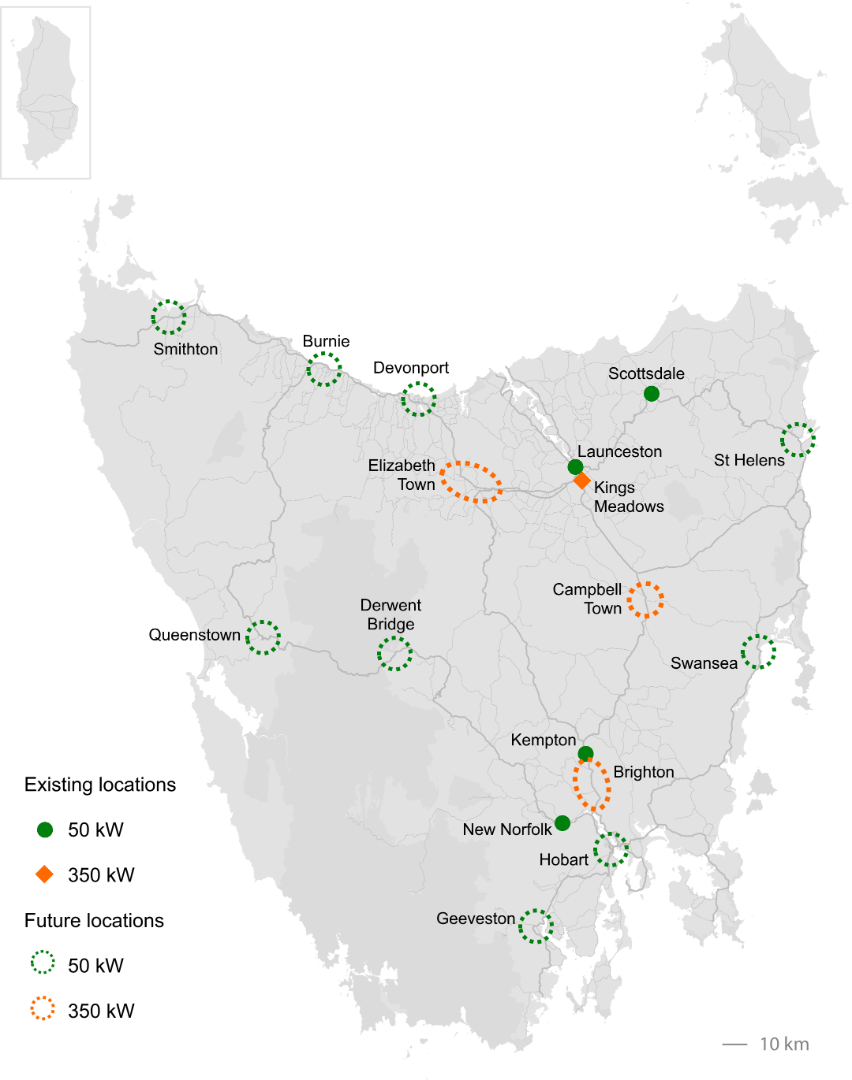 Map of existing and proposed fast chargers (50+ kW) in Tasmania

Progress has been slow – no doubt in part to the Covid-19 situation, but also due to the detailed planning and negotiation that goes into installing a fast charger.  The first ChargeSmart grant recipient unit was installed in December 2019, by EnergyROI, who installed a 50 kW fast charger at the Scottsdale Art Gallery Café.  Shortly thereafter, Chargefox installed – outside of the grant program – the first ultra-rapid (350 kW) chargers in Tasmania – at Kings Meadows, in the southern suburbs of Launceston.

However, the second half of 2020 will see a huge jump in rate of new sites coming online!

At the time of writing, one additional station has just opened (within days)!  Bennett’s Petroleum – owner/operator of the Mood Food Kempton site – launched their second fast charger at Mood Food New Norfolk [pictured below], approximately 35 km north-west of Hobart and the gateway to the upper Derwent Valley and west coast. 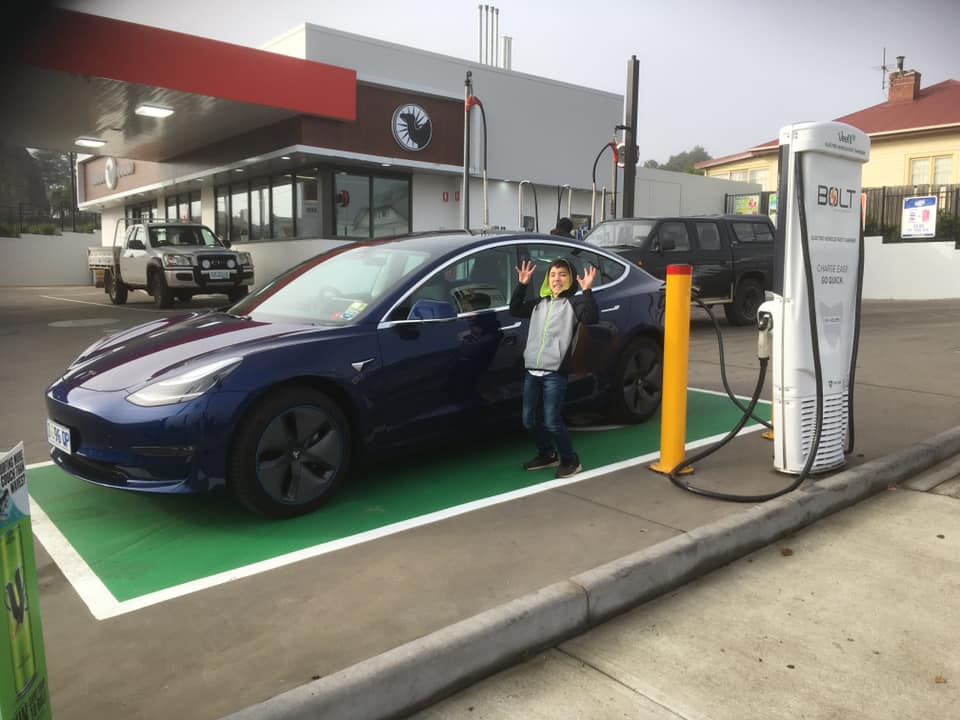 There are three more locations under construction.  The City of Hobart is installing a fast charger in the Dunn Place Car Park, conveniently located between the Hobart CBD and the waterfront.  Huon Valley Council is installing one at the Geeveston Visitor Information Centre – at 60 km south of Hobart, this will be the southern-most EV fast charger in the country.  The third site will be at Derwent Bridge in central Tasmania [pictured below]– the first of six sites by Electric Highway Tasmania, a company established by some members of AEVA’s Tasmanian branch.

We should also shortly see construction commence at Queenstown on the west coast (another EHT site) as well as the long awaited Campbell Town location – which will be an ultra-rapid station by Evie Networks.  Campbell Town is an iconic stopping place for those travelling between the north and south of the state, and the two 350 kW charging units will be in a prominent location in the Commonwealth Lane car park. 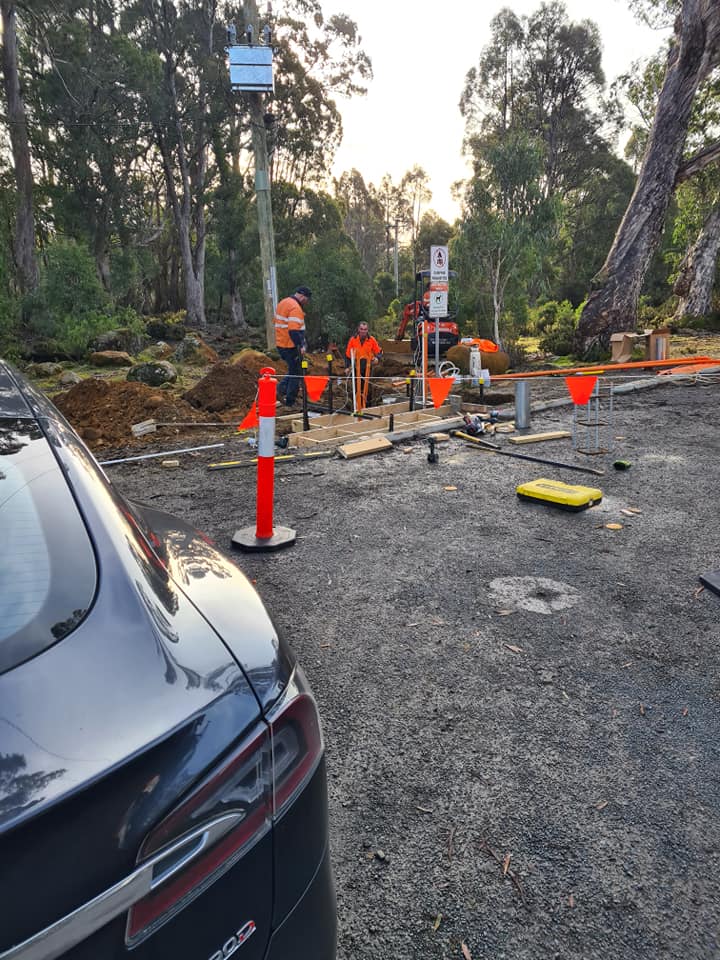 Further sites will be installed across all parts of the state over the remainder of the year.   Some of the new stations are over and above the ChargeSmart grant program, so if everything goes to plan our small island will have 17 locations (including 4 ultra-rapid sites) active by the end of the year, with virtually no gaps larger than 150 km.  If you missed out on coming to Tasmania for the AEVA Conference in 2017, then start making your plans for an electric tour of Tassie in 2021! 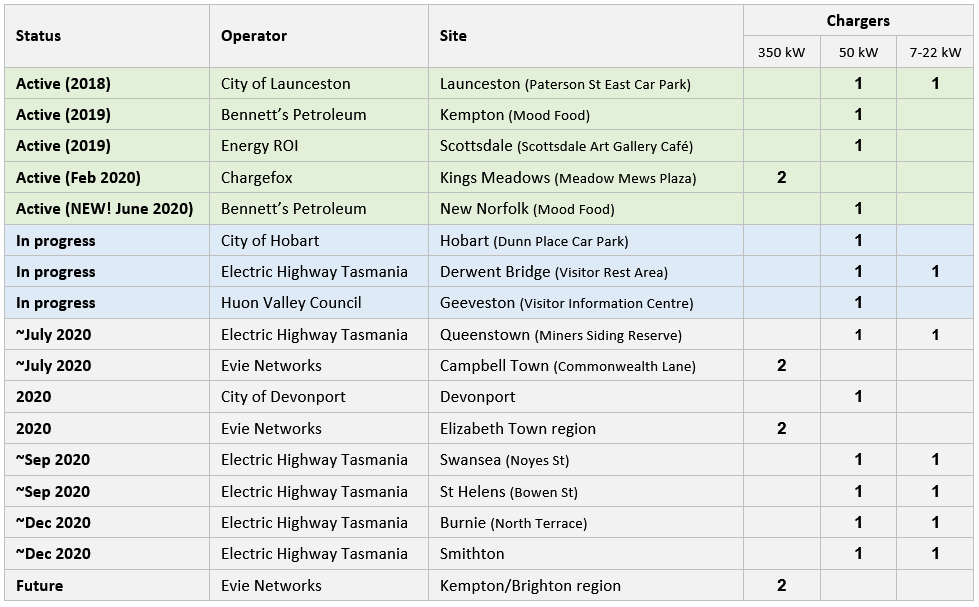