A Fuel Cell Electric Vehicle (FCEV) just has a fuel cell to provide the electricity for the motor rather than a large battery charged from the mains. It would generally have a small battery to buffer the peaks since fuel cells are not very good at short bursts of power. They would prefer to tick along at a lower rate meeting the average demand of the motor. In that respect they are much like a petrol hybrid - the petrol engine can run a generator at a more constant rate and a small battery alternates between provide the extra power when required or soaking up the excess power from the generator in between the bursts of acceleration or hills. 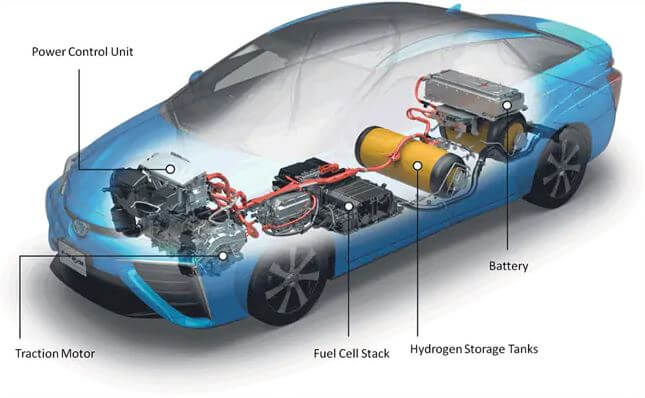 I am a bit of a fuel cell EV sceptic. Clearly they work. Many manufacturers have been making FCEVs as concepts and demonstrators for years. They might be very appropriate, perhaps necessary, for some specialised applications such as very large vehicles requiring very long range such as ocean-crossing ships. I am not convinced for general usage.

Why the reservations? We have an existing distribution network for liquid fossil fuels and we have an existing electricity network. We don’t have a distribution network for H2. Hydrogen is a difficult material. It is the smallest molecule there is. It can diffuse out between the atoms of vessels that would be leak-proof to anything bigger. Metal containers become brittle after containing H2 for a while. It only becomes liquid at 20 degrees above absolute zero. Liquefaction takes a lot of energy, which makes liquid hydrogen especially inefficient as a medium for energy storage.

One possibility for the transport problem is to link hydrogen (H2) to nitrogen (N2, 80% of the atmosphere) to make ammonia (NH3). This process is also very energy intensive but it is done on a grand scale to make nitrogen fertilisers. This is being touted as a way to export energy and might work. NH3 might even be a bit more practical as the fuel for a fuel cell, but ammonia fuel cells are still in their early days and have problems of their own.

Some of the enthusiasm comes, I suspect, from people who don’t get how the electricity network works but who feel comfortable with the idea of carting about energy dense liquids and pouring them into tanks. They imagine that H2 would not be much different from LPG for cars. They understand going to a special filling station. They don’t seem to get that battery electric car owners will mostly charge at home and won’t want to go to special filling stations if they don’t need to. FCEVs appeal to people concerned about filling time. They like filling a tank in a few minutes and getting a lot of range. Again, I don’t think they get that people won’t worry about that if they can fill at home and have a big battery with plenty of range. Rapid DC charging once on a trip when you need a meal or coffee break anyway is not such a big issue that it needs an entirely different energy medium and associated infrastructure.

FCEVs are also supposed to ‘fix’ the problem of people charging at times of peak demand. Instead, H2 can be made at times of high renewable production. However, until we have an over-build of renewable generation, so we are beyond 100% renewable electricity with capacity to spare, I am not keen on inefficient production of H2, then inefficiently carting it around the country-side in very specialised tankers, in order to use it inefficiently in vehicles. Instead, I can see smaller scale H2 production and storage on-site with solar and wind farms for ‘firming’ supply and allowing the generator to play arbitrage. This podcast presents a much better informed analysis of which applications for hydrogen are likely or unlikely to fly.

For personal vehicles, I think FCEVs are a solution looking for a problem. So long as people mostly avoid times of peak demand, we have and will continue to have plenty of generation to cope with a complete changeover to battery EVs. We already have ways to encourage EV charging outside peak times. People with solar will prefer to charge from their own production during the day. People on Time of Use or Peak Demand tariffs (all of us, soon enough) would be crazy to charge on the peak unless we really have to, and that becomes less and less of a need as batteries get bigger. People drive well out of their way to get a few cents/litre off fuel so I expect they will be keen to ‘fill-up’ at half price unless desperate, which will be rare.

FCEVs are also supposed to fix range anxiety. However, that also is less of an issue with larger batteries in vehicles and rapid DC charging becoming common along major routes. By the time we could have a hydrogen distribution network like petrol bowsers (they will never be that simple), we will already have rapid chargers everywhere connected to the electricity distribution network we already have. Any concern for local load issues can be addressed with on-site battery smoothing and solar such as here.

In summary, FCEVs work but I don’t see them as the mass market solution that battery EVs are already well on the way to becoming. FCEVs still need a lot of things sorted out (a distribution network, possibly intractable storage issues and inefficiencies at every step - electrolysis, leakage, carting the stuff about the countryside, the fuel cell itself (as discussed by Ziga and by Seba) and, even with major advances on each of those, I am not convinced that FCEVs would then offer a compelling advantage over the by-then established battery EVs.