More than 8000 visitors attended the Off-Grid Living Festival at Eldorado over the weekend of 10-11 April 2021, and it appears that most of them checked out the EV Showcase which was organised by AEVA. 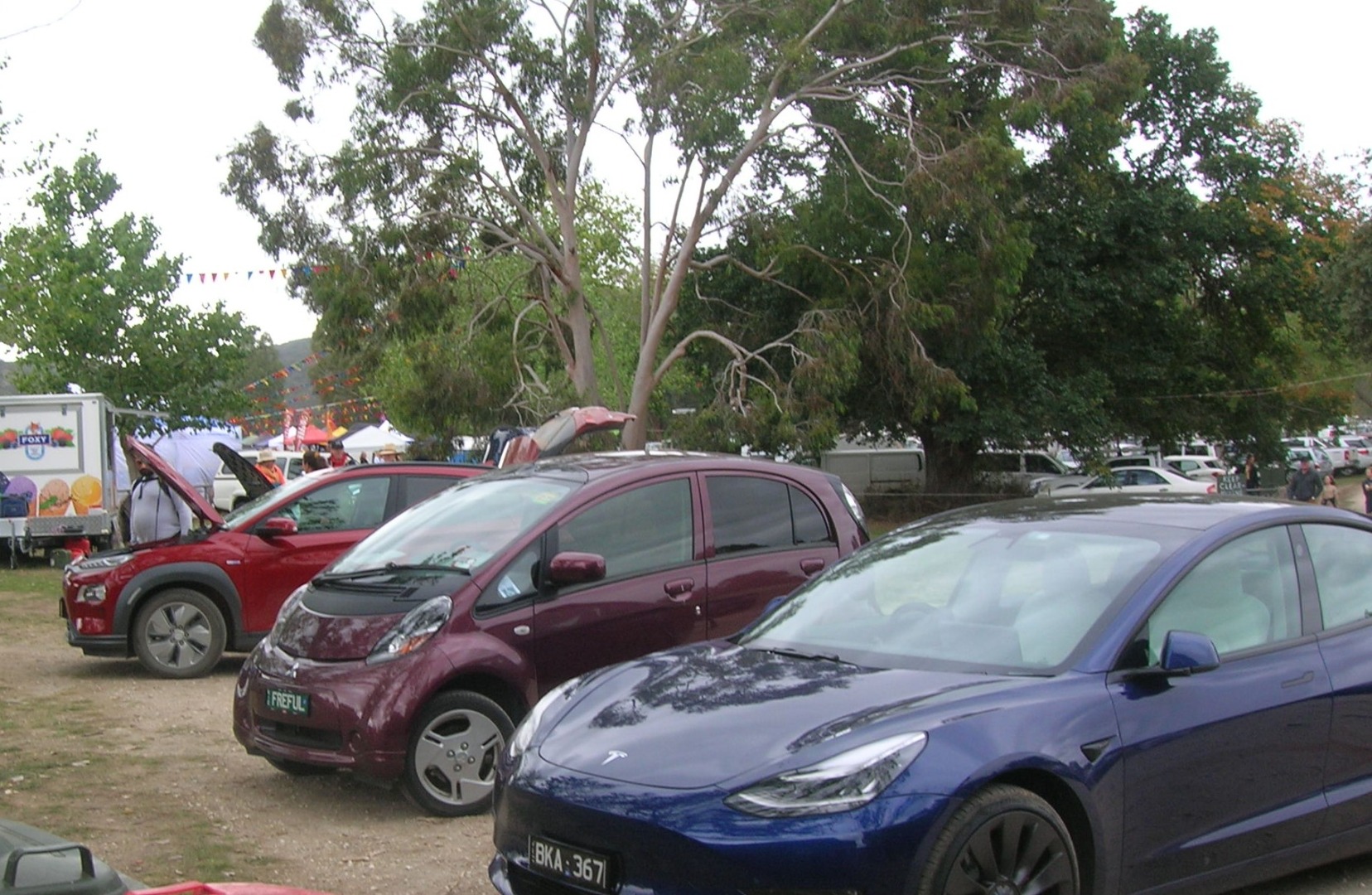 The Festival’s aim was to inspire people to transition to more sustainable energy lifestyles by connecting with others, including relevant industry experts.

Seven EVs were contributed to the Showcase: three Tesla Model 3s, two Hyundai Konas, one Hyundai Ioniq, and one MG ZS EV.  In the event, owners of three more EVs (two Model 3s and one iMiEV) turned up at the Festival, discovered the Showcase, and added their support.

Robert Bird of Winton brought his Kona and commented: “I was very impressed with the turnout and the incredible interest shown by the public about EVs. I was a little bit reserved about how the weekend would go, but when we got there on Friday the site was terrific. The Saturday was amazingly busy and the Tesla brand caught the attention of most people.  Visitors reported that it was great to just chat with owners and not be pressed by a sales consultant”.

David Coates brought his performance Tesla and was exhausted with almost non-stop test rides.  The people approaching David ranged in age from about 10 to middle age, both males and females.  Most said they had been hoping to go for a ride in a Tesla for a few years so they really appreciated the opportunity.  David said: “without exception, they were all excited when we returned. It served to remind me, if it was needed, that I'm driving a vehicle that's just a bit special”.

Phil Dwyer of Mount Bruno brought his Kona and reported that “everyone enjoyed the weekend and there was a huge amount of support from the visitors at the Festival.   We were all busy with at least five people at each car most of the time.  From the feedback I have received, it looks most likely that there will be at least another 2 or 3 EV owners within the next few weeks”.

Bernie Broom, who had travelled from Smiths Gully near Melbourne in his MG ZS EV, commented “if I'd been a car salesman I could have sold 2 MGs on the spot!”

Paul Baker presented on Saturday morning to a full tent of festival attendees willing to learn more about EVs.  He talked about owning and driving a Generation 1 Nissan Leaf, dispelled many EV myths and shared his real-world experiences.  Paul drove his new Model 3 Tesla to the event and although he didn't take people out on test drives, he shared his knowledge at the EV Showcase to festival attendees. 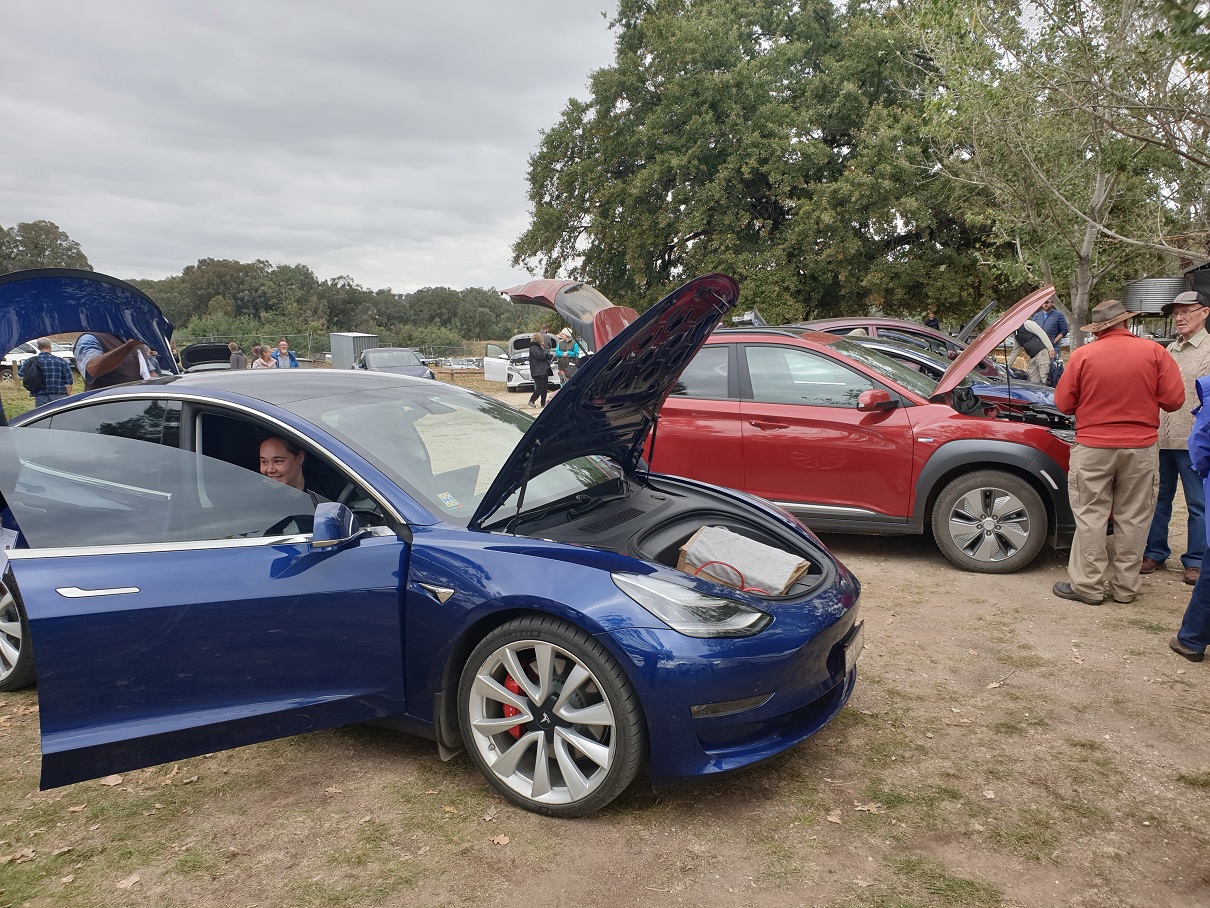 The Showcase was a collaboration between the Victorian and ACT branches of AEVA.  The ACT Branch had suggested a Showcase for the 2020 Festival, which was cancelled due to Covid travel restrictions.  After it was invited by the Festival to try again in 2021, the ACT Branch approached the Victorian Branch to jointly organize the Showcase.  Robert Bird and Phil Dwyer provided the onsite supervision.  The ACT Branch liaised with stakeholders, edited and printed the leaflets and provided laminated AEVA fact sheets.  The Victorian Branch publicised the Showcase, resulting in offers to participate from some of its Melbourne members.

The leaflets provided information about the benefits of EVs, the available models in different price ranges, how to buy a used EV, how to charge and how to connect with AEVA Victoria.

In summary, this event was a very worthwhile collaboration which promises to be repeated in 2022.