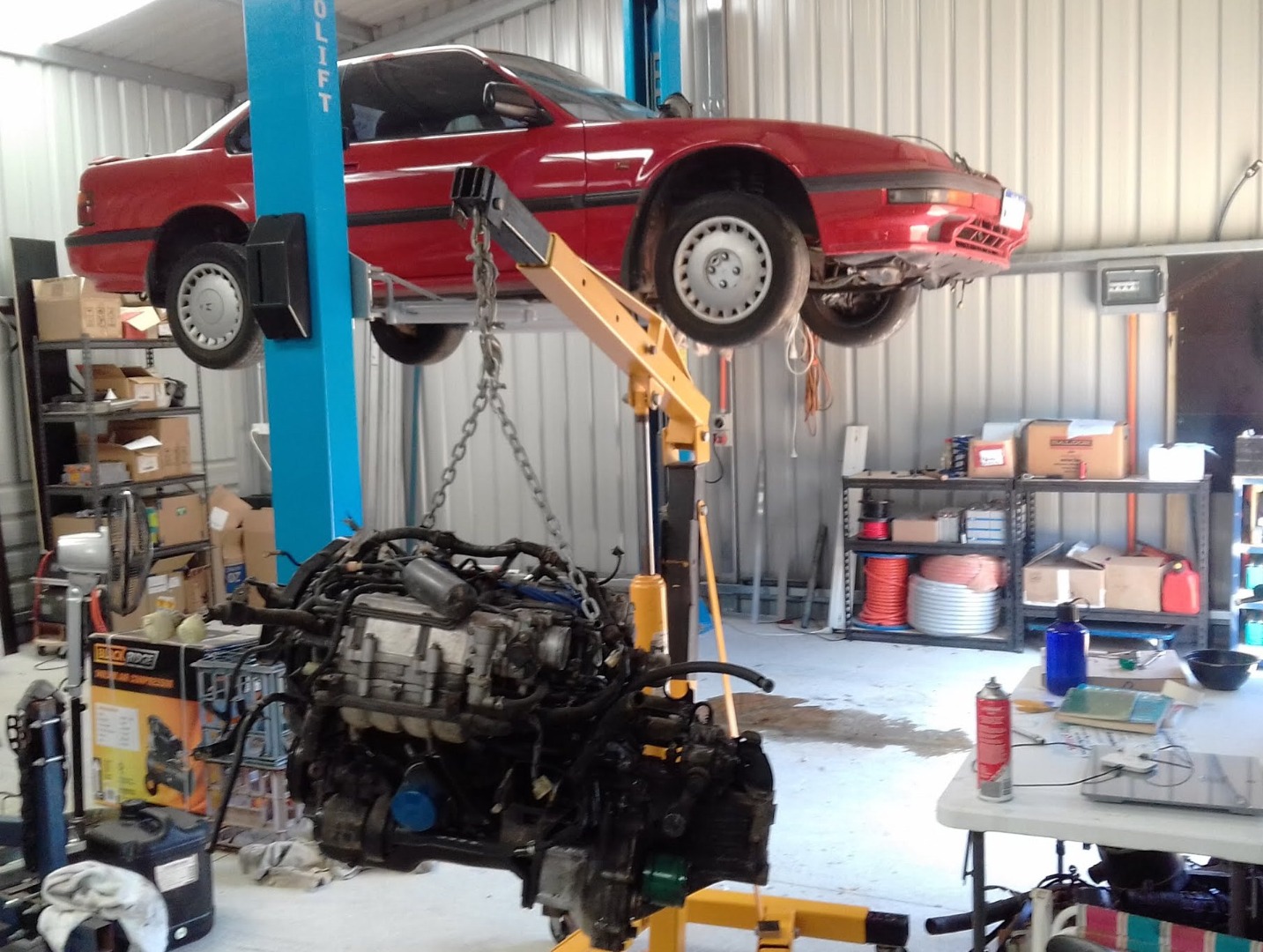 The AEVA frequently gets enquiries about converting petrol cars to electric – after all, this is what we’ve done for almost 50 years.  But the conversation usually starts with a few time-saving questions: “Do you just want an electric car, or do you want a project?”  And “If you do want to go down this path, what kind of money are you willing to spend?”  These two questions either stop the idea dead in their tracks, or excite them enough to proceed.

Francess emailed me with her proposal – to convert her beloved 1988 Honda Prelude (the one with the 4-wheel steering) to electric.  She’d owned the car for 26 years and it had been meticulously maintained its whole life, so why not?  I proposed the two questions above and discussed the merits or otherwise of converting a car.  Now, Francess was not able to do the conversion herself. And despite Perth being home to at least three workshops that used to specialise in conversions, there weren’t any doing it today.  So she was asking for anyone who might be willing to undertake the project.  I have been driving a 1988 Honda CRX with plans to convert it dating back to 2012, so this might just be the project I need to get my skills up...

I proposed a selection of options, ranging from expensive to incredibly expensive.  The cheaper options being ones involving affordable prismatic LiFePO4 cells and DC motors, and the expensive ones being high energy density lithium cobalt cells with an integrated liquid cooling system (something I’d been designing for a while now).  The minimum spend was looking close to $30,000, while the uppermost spend was closer to $40,000.   Bearing in mind that at this point almost two years ago (early 2018) you still couldn’t get a new EV for under $55,000 and all used Leafs on the market were offering barely 100 km around town.  So she committed – let’s build the Electric Prelude with the longest range practical and we’ll incorporate the cooling system so that the battery has a long life.  All 4 seats would be retained and the 4-wheel steering would be retained as well.

On December 16th 2018, the Prelude was into my workshop and removal of all the oil-burning bits commenced.  By the end of the weekend we had the engine out and all of the cars vacancies were being measured up for battery space.  In the roughly 9 months prior, I’d been ordering parts and making plans for the battery modules.  I settled on 8 modules of 3 kWh each, measuring roughly 300 mm x 200 mm and 180 mm high.  The cells were a pouch cell of 7 Ah capacity and these were ganged up into parallel groups of 10.  I’d then arrange 12 of these gangs in series to complete the module.  Each cell was hole-punched to work with the termination kits I’d developed for e-motorbikes and e-bikes.  The whole lot sits upon a machined aluminium plate which has a coolant maze in it – the idea was that the cells would be stuck to the plate with an electrically non-conductive, but thermally conductive epoxy which helped transfer heat from the cells to the coolant.

The fuel tank cavity of the Prelude is huge, but sadly not quite huge enough.  We couldn’t fit all 8 modules there, only 6.  The engine bay is a popular spot for converters, but the Prelude has a very low profile and it was already pretty full.  Eventually we put them in the spare wheel well of the boot, and moved the spare wheel into the boot itself. 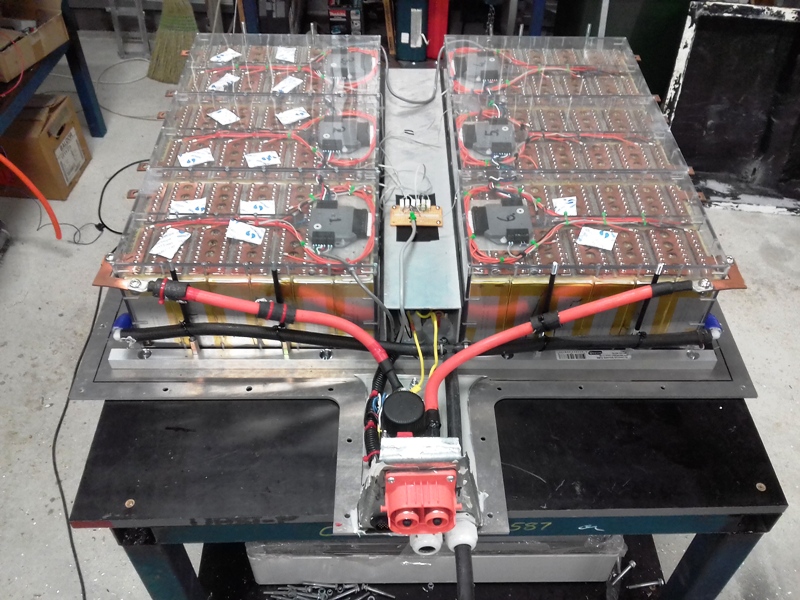 Six of the eight battery modules are located under the read seat where the fuel tank once was.  Liquid cooling ensures the cells will have a long service life.

The adaptor plate was a bit of a saga.  Lots of places said they could machine it, but few were able to follow through on their promise.  In the end I wound up marking out the plate myself, and taking the plate to a friend’s machine shop in Chidlow.  We retained the clutch and 5-speed gearbox, so it makes for smooth gear changes both up and down.  For the most part though, you just leave it in 4th gear and drive.

On September 2nd 2019, the Prelude left my workshop under its own steam.  At this point lots of other systems were not installed, and it only had 6 of the 8 battery modules, but it could be driven safely for a test drive or two.  An early, some might say premature test-drive to Mundaring resulted in a ride on the back of a flatbed, but it was a fairly quick repair (the drive contactor didn’t have an economiser and overheated).  By early November the full battery pack was in and the car was working reliably.  I took it for a long test drive to see what sort of range can be expected on a full charge – we clocked up 175 km with a mixture of freeway and city roads!  By Christmas time, the air conditioning had been installed, the suspension had been improved (31 years is a long time between shock absorbers).  The car now drives like a dream.  Perhaps the greatest feeling for me was watching the cell temperatures start at 35°C in the afternoon and drop to 31°C only 20 minutes later with the A/C on.  The cooling system works really well, and should ensure a long life for these cells. 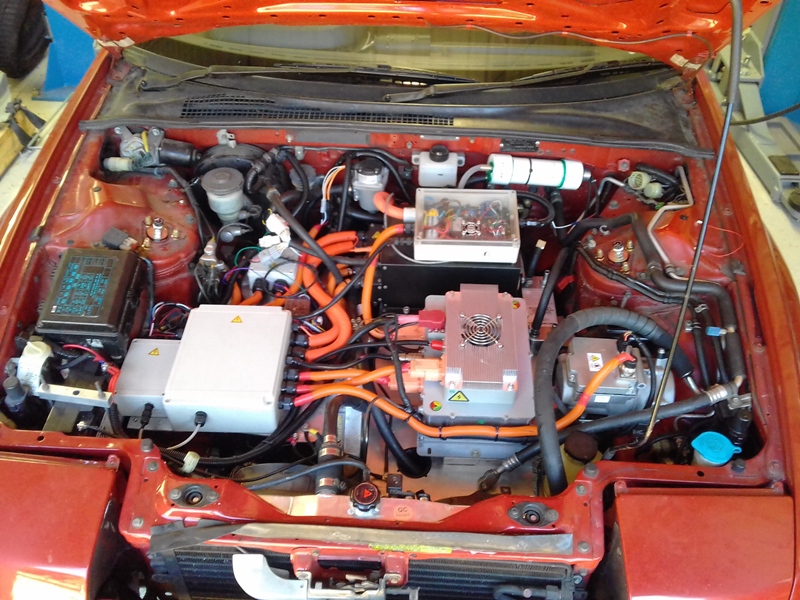 The Prelude was weighed at 1260 kg tare (100 kg heavier than stock) and has a new mass balance 55% front 45% rear.  The certifying engineer has submitted all paperwork to the WA Department of Transport, so we await the formal letter!

Cost: $40,000 inclusive of parts, labour and other upgrades.

Time taken: 18 months total, but only off the road for 9 months.